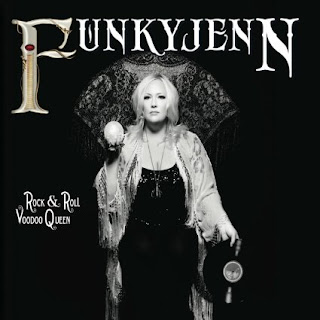 I recently caught a couple of sets by Funkyjenn at Ireland’s 32, and really enjoyed their music. They played the majority of tracks from their 2013 release, Rock And Roll Voodoo Queen, an album that was produced by Ted Russell Kamp and Jennifer Gibbons. It was through Ted Russell Kamp that I became interested in this band, and on this album he plays bass, Hammond, acoustic guitar and percussion, as well as providing some backing vocals. Also joining Jenn on this CD is Carl Byron, a musician I’ve admired for quite some time, having seen him perform with Anne McCue a couple of times, and having heard him on several other discs, including Mason Summit’s Loud Music & Soft Drinks, Steve Casper & Cowboy Angst’s Endless Sky, Skyline Drive’s Topanga Ranch Motel, and of course on Anne McCue’s Blue Sky Thinkin’. On this CD he plays Wurlitzer, piano, organ and clavinet. Rounding out the band are Dan Wistrom on guitar and Jamie Douglass on drums. This is an excellent band, no question, but it is Jenn’s vocals which of course are the driving force of this music.

The CD opens with “Shoulda Been My Lover,” the song Funkyjenn closed the second set with the other night. It’s a rousing rock and roll number that right away shows the power of Jenn’s vocals, as she belts out the lyrics: “You’ve got me pinned against the jukebox and you just won’t leave me alone/You had your chance with me oh so many years ago.” That is followed by “Boom Boom,” a song that Ted Russell Kamp included on The Low And Lonesome Sound, which was released this summer. And it is this song that got me interested in Funkyjenn. This is one of my favorites. It has a great rhythm and is a lot of fun. And of course it does make me think of John Lee Hooker’s “Boom Boom” when Jenn sings the title line. It was written by Jennifer Gibbons, John Schreffler and Ted Russell Kamp. Here is a taste of the lyrics: “Come a little bit closer/I’ll give you the goods/Whatever you wish for/It’s understood/That I am yours, boy, and yours alone/Hang up your tie, hang up your cares, hang up the phone.”

Probably my favorite track on this disc, however, is “Butterflies Bleed,” a slower, more soulful song, with a passionate and moving vocal delivery. “When you held my hand/I knew I was at your command/But the feeling was too strong to mention.” And of course I love the organ on this track. “Butterflies Bleed” is just a wonderful and strong song.

“Nashville, TN” is a solid bar-type rock tune, with some nice work on both keys and guitar. It’s followed by “Outta Sight Outta Mind,” the only song I hadn’t heard prior to popping in this CD, and it’s another of my favorites. This is another slower number, and it features some excellent work on violin by Aubrey Richmond (this is another musician I admire; I think I first heard Richmond play on the Kelly’s Lot album Plain Simple Me). There is a delightful beauty to this song. And I love Jenn’s vocal delivery, particularly on lines like “I’ll find someone else/It’s easy to do/He’ll play me a song/And buy me a drink or two/Then he’ll take me home/Lean in for a kiss/I’ll pretend that I like it/And that you don’t exist.”

The CD closes with its title track, “Rock And Roll Voodoo Queen,” which was written by Ted Russell Kamp. This is a good, lively rock and roll tune, which has something of a 1970s vibe to it. “The show begins when the clock strikes midnight/It’s the witching hour, and everybody’s feeling all right.” Oh yes.