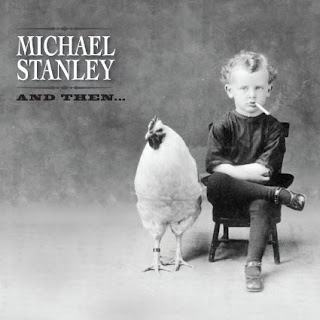 Michael Stanley has been putting out good records since the 1970s, with the Michael Stanley Band and then with the Resonators. You’ll probably remember The Michael Stanley Band’s hit tune “He Can’t Love You,” mainly because that music video played almost constantly on MTV, but there has been a lot of great material over the years. And Michael Stanley continues to release some really good tunes. His newest album, And Then…, contains mostly original material, in the rock and country realms (though a song like “Shifting Gears” is a little more bluesy). This album has Stanley backed by The Resonators, as well as by Ed Caner on violin and viola, and Don Dixon on backing vocals. It was produced by Michael Stanley, and mixed by Bill Szymczyk. By the way, the CD boasts a pretty interesting cover, and Michael Stanley assures us in the liner notes, “And believe it or not, the cover photo is not Photoshopped.”

He kicks off the new CD with “All Together Now,” a happy summertime rock tune with a great beat. The song begins with just drums, and when it kicks in, it becomes a quite catchy song. It’s hard not to get into the spirit of the song, especially when the backing vocalists join him for a little “Sha la la.” And there is some groovy work on bass during an instrumental section. This is just a good rock and roll number, and you’ll probably find yourself singing along.

“Radio Waves” is a slightly more serious, thoughtful song, but still has a lively energy. It’s a good, honest rock tune, reminding me of some of the best ‘80s music, like Tom Petty or John Cafferty. And there are some good lyrics, like “But lines get drawn and lines get crossed” and “There’s too much me and not enough us/Too much hate and not enough trust/Too much confusion between love and lust/And sure as hell not enough time.”

“Soul Of A Train” is a slower number, with something of a country vibe to it. This is a love song of yearning, of longing with lines like “Lonely rooms, they wrap their arms around you/Spin you down to your knees” and “Think of all those nights that I held you/Close my eyes, I’m there again/Just take me there, take me/You’re everywhere, and I’m waiting/For the sound of a train.” It’s interesting that train imagery is still so effective, even when most people these days haven’t ridden the rails. “All I need to hear is the sound of a train.” This one was written by Marc Lee Shannon and Michael Stanley.

The CD’s title track, “And Then,” is on the pretty side, with an emotional vocal delivery. “So tell me a story and make me believe/And let us begin/’Cause I’m gonna hold you closer and closer/Over and over, closer and closer/And then...” I love the idea of being open to the possibilities, and that the title line “And then” is delivered without continuing the thought aloud, without giving specifics. There is magic and hope in that simple “And then.” And I really like these lines: “And the shadows hold their secrets/And the wise men hold their tongues/And the lovers hold the moment/When they know it’s begun.”

“Snakes,” a harder bluesy rocker, contains a Hamlet reference in its lyrics. In this one, Michael Stanley sings, “And don’t stand a chance and there lies the rub.” The phrase “There’s the rub” is from Hamlet’s most famous soliloquy: “To sleep? perchance to dream. Ay, there's the rub;/For in that sleep of death what dreams may come,/When we have shuffled off this mortal coil,/Must give us pause.” “Snakes” has some interesting and amusing lyrics, such as “Church ain’t over ‘til the snakes/Are back in the bag” and “Or the ones that keep looking for Jesus on toast.” Michael Stanley follows that with an absolutely wonderful and sweet country song, “Sweet Spot,” which is one of my personal favorites. This song had me smiling from the moment it started. Partly that’s due to the wonderful work on fiddle, but I also really like the lyrics and overall feel. “I’m a man who’s got/No problem with directions/So tell me what you want/’Cause we’re in this thing together now/Lookin’ for that sweet, sweet spot.”

Then “Long Ohio Winter” is one of those gloriously sad songs about missing someone. A long winter is just longer without the person you love, and this song perfectly captures and conveys that feeling. “I am so tired of waiting/For the sun to slip on through/Been a long Ohio winter without you.” The nights, and even the days, are darker when you’re missing that special someone. And check out that beautiful violin as the song fades. This is another of my favorites.

The album’s sole cover is “Good Day For The Blues,” written by David Grissom of Storyville, and originally included on that band’s 1996 release, A Piece Of Your Soul. Michael Stanley does a good job with it, and I like Bob Pelander’s work on piano on this rendition. That’s followed by “In Your Kiss,” another sweet, beautiful love song. Check out these lines: “I know you watched the moon tonight/And how I wish that I was there/And having bathed in both your lights/Well, that moon just can’t compare.” So sweet, right? And besides, this song features some lovely work on violin.

CD Track List
And Then… is scheduled to be released on October 16, 2015 through Line Level Music.
Posted by Michael Doherty at 3:06 PM