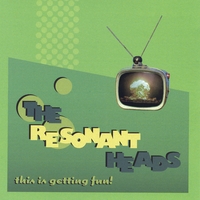 The Resonant Heads are a Los Angeles-based pop rock band, with some definite 1960s influences, as well as a bit of punk attitude. Their debut album, This Is Getting Fun, which was released in 2008, is largely the work of two people: Dawn Frinta and Michael Sattin. They wrote all the material and played the majority of the instruments, though are joined by some friends on certain tracks. This CD is everything I could want from pop rock – fun rhythms, catchy riffs, great energy, excellent vocals, and positive vibes.

This Is Getting Fun opens with “I’ll Take You,” which begins with the drums quickly fading in, like the band is rapidly approaching us, and then there is some great work on electric guitar before the vocals come in. The hell with easing in, this band announces its presence immediately with a fun rock tune that you’ll likely want to turn up. Brad Gordon does those cool guitar solos on this track. But Dawn Frinta’s vocals are what I like most about this song, with a great combination of sweet friendliness and kick-ass power. Here is a taste of the lyrics: “Well, I don’t make concessions/And I don’t read subscriptions/But I’ll take you.” It’s a strong opener, and it’s followed by “It’s Not Me,” a rock tune which has a great raw edge at times, particularly in the vocals, while still maintaining a very good groove. John Wolf plays drums on this track (as well as on several others).

Near the end of “Kiss My Love,” there is a surprising, mellow section with some interesting work on guitar. I dig it, and then I love the way the song quickly builds back from there, like dipping low only to be able to go right back to those heights. That one is followed by one of my personal favorites, “Unglued.” It’s got this great pop groove, along with attitude, which makes for a seriously good tune. Plus, there are some great lyrics, like these lines: “And I’d save you if I could/It does no good to please you” and “Have your little fun/Don’t come undone ‘til I do.” Robin Fallowfield plays rhythm guitar on this track.

But my absolute favorite track is the CD’s closing number, “War.” This song delights me for so many reasons, and on several levels. The first time I heard it, a few of the lines had me laughing aloud. I mean, hell, the first line is “War isn’t fun anymore.” That had me from the start, and that line is followed by “It’s like we’ve got to appease the left and right/And everyone in between.” Great, right? And then it pokes fun at a phrase that I hear a lot and despise: “It’s like we’ve got to agree to disagree.” By the way, one of the other lines that struck me as hilarious is “Vietnam ruined everything,” particularly in context. Plus, the song is just so cool, even if, for some reason, you don’t want to pay attention to the lyrics. Perry Ostrin plays drums on this track, and Amanda Mullins and Robin Fallowfield provide backing vocals.

CD Track List
This Is Getting Fun was released in 2008.
Posted by Michael Doherty at 11:55 AM