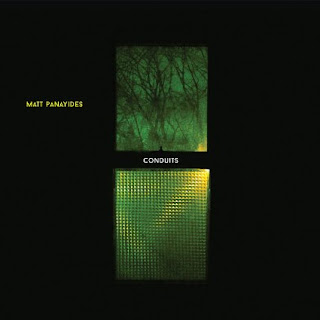 Matt Panayides is a jazz guitarist and composer, and his new album, Conduits, features all original material which he composed, arranged and produced. This is his second album as a leader, following 2011’s Tapestries Of Song. As with that first CD, here he is joined by Rich Perry on tenor saxophone. Rich Perry has released several of his own albums, including this year’s Organique. Also joining Matt Panayides are Thomson Kneeland on bass and Mark Ferber on drums. (Kneeland too has been band leader on several CDs, most recently on 2010’s Mazurka For A Modern Man, and Mark Ferber has played with a wide range of folks on both coasts.) This album was recorded in New York on June 6th, 2014.

The CD opens with “Notes From The Anechoic Chamber,” which has a really nice groove on drums and bass. And it isn’t long before Matt Panayides delivers some wonderful stuff on guitar, while that great groove continues. I also love Rich Perry’s lead on saxophone, and the way the guitar still offers interesting stuff beneath it. An anechoic chamber, by the way, is a soundproof room, designed to completely absorb reflections of sound, to keep exterior noise out. From what I understand, it’s difficult to stay in one of these rooms for very long, as you begin to hear all your bodily sounds and nothing else. This tune, however, has a very positive vibe, without hints of stress or anxiety that might be caused by remaining in one of these rooms.

It’s followed by “The Past Is Obdurate,” and almost immediately the guitar and saxophone are working in conjunction, and it sounds great. The guitar seems to want to go off in a solo, do some exploring, but the saxophone asserts itself, holds on. And then surprisingly a drum solo emerges. This is less than a minute and a half into the track. And it isn’t until after the saxophone and guitar have revisited that theme (and this time with more insistence) that the guitar is allowed to take a lead spot.  I really appreciate the journey of this tune, though I do wish it had a stronger ending rather than fading out.

Though perhaps that fade-out helps lead into the following track, “Heny’s Tune,” which begins like a sweet lullaby. And the saxophone is so gentle when it comes in. This is a beautiful late-night track, which takes on a more romantic bent, and yet still has the freedom to explore some areas within its sweet world, particularly on guitar. This one ends up being one of my favorite tracks. It just makes me feel really good. And then “Awaken” has kind of kind of an older and lively jazz feel, taking us back several decades. I love the way the bass becomes dominant, demanding attention at points during that great lead guitar spot by Matt. This is another favorite of mine.

“Gravity And Walt” begins with a guitar solo, and the other musicians don’t come in until about a minute into the tune. There is something kind of beautiful about this track, something light at times, and there is also a great jam feel to it. “Watcher” has a different feel that I really got into, and features some free-moving work on saxophone. The CD then concludes with “Of The Winter Light,” which begins with a mellow guitar solo, and soon builds into something wonderful, with a bright, energetic, positive vibe. This is another highlight of the CD.