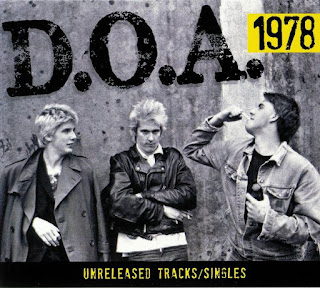 Every day when I wake up I check to see if Donald Trump is dead, and so far I’ve been disappointed. This is bad news for democracy, for every day this administration is allowed to continue is another day when we march toward an authoritarian, dishonest, racist and incredibly stupid existence. Never before have so many useless and thoroughly corrupt people had so much power. People like Betsy DeVos, Lindsey Graham, Mitch McConnell, Brett Kavanaugh, Mark Meadows, William Barr and Mike Pence are people you wouldn’t trust to park your car, never mind lead a nation. If you are in the habit of using your brain, you are likely frustrated, furious, depressed. Some serious hardcore punk music is what is called for. Last year D.O.A. released an excellent new album, Fight Back, which features the song “You Need An Ass Kickin’ Right Now,” the video for which includes footage of Putin, DeVos and Trump. That album includes a whole lot of excellent original songs. Now we have a chance to return to the band’s early days with 1978, a collection of singles and previously unreleased tracks from 1978-1982. This is the medicine I’ve been in desperate need of, music that expresses the anger we all feel. Here is that raw, unbridled, honest, kick-ass music that could take this administration by the throat and put an end to the horror show in a heartbeat.

The disc opens with the 1979 demo of “The Enemy,” a song that would end up on the band’s 1980 debut LP, Something Better Change. At the beginning of the track, we hear it labeled “Take one.” This version completely rocks, as you probably guessed, but it also features some different lyrics from the album version. Instead of the lines about roping you to a time clock, they sing about kicking Nazis in the head. Oh yes! “You got to know who your enemy is.” That’s followed by the 1981 demo of “No God, No War,” a song that would end up on the expanded CD release of War On 45 (a title which has a different meaning these days, eh?). I love the main line of this song which is, “If there’s no god, there would be no war.”  No kidding. How many wars have been caused by completely insane beliefs about what a deity wants humanity to do? All of them? The song’s title is also a play on that slogan, “No God, No Peace; Know God, Know Peace” (which I remember seeing on billboards in the south). The 1981 demo of “Bored And Suicidal” is also included. The first lines of this song would later be used for the song “Suicidal,” included on the band’s 1990 LP Murder.

“Disco Sucks” is still enjoyable, even if the sentiment is rather dated at this point. This song was released on a 4-song single in 1978. The other three songs from that single are also included here, though not presented in order – “Nazi Training Camp,” “Woke Up Screaming” and “Royal Police.” “Nazi Training Camp” is one that stands out, because of the bizarre position of power those pricks suddenly enjoy in the United States. White supremacist Donald Trump has allowed Nazis to have a public voice again, yet one more reason to want that bastard gone. I mean, hell, I thought one thing everyone could agree on is that Nazis are horrible people. It seemed that even they knew they were horrible, for they kept their backward views mostly to themselves. Now they march proudly, chanting their hateful nonsense. As much as I abhor violence, every last one of those Nazis deserves a severe beating. “Nazi Training Camp” begins with a military march on drums, then the drum beat picks up speed, turning into a glorious hardcore song. “Don’t you see it/This is a Nazi training camp.”

Some people seem to have rewritten history to make Ronald Reagan some kind of hero. What they are forgetting is that he was a shitty actor, a disaster as the president of SAG, scum as the governor of California, and a demented tool as president of the United States. Basically, he was an asshole from beginning to end. D.O.A. is aware, of course. “Fucked Up Ronnie” was the lead track from the 1981 5-song 7-inch, Positively D.O.A. “You’re fucked up, Ronnie.” This disc also includes the 1982 demo of “America The Beautiful,” a song that was included on that year’s War On 45. And, wow, these lyrics are sadly relevant these days: “It’s the new immoral right/They wanna cleanse the home of the brave/For the master race of the USA.” And these: “America/I got my bible/America/And I got my handgun/America/Now I'm ready.” And that’s followed by the demo of “Liar For Hire,” another song that feels pertinent. Has there ever been a liar like Donald Trump? His rabid, demented followers don’t care about truth. I want to shout these lyrics to Donald Trump and the rest of his horrid gang: “Got to get you out/Get you out of here/Get rid of you/Nobody wants you/Nobody needs you.”

Suddenly in the middle of this disc we get an absolutely fantastic rock and roll number, “Rip Dis Joint,” something of a surprise and a whole lot of fun. It has a great bass line, some wild guitar work, and a ton of energy. Just dance away some of your cares with this 1979 demo. (And again, at the beginning we hear that this is the first take.) This is one of my favorite tracks. It’s followed by “World War 3,” which was originally released as a single. “We're pawns in the middle, sittin’ ducks with no acquittal.” “The Prisoner” is another of my favorites. This groove throws me against my wall, and I mean that in a good way, of course. It’s a groove with teeth and claws and strength. And check out those drums. Unleash this song in the White House, let it tear into whatever flesh it finds in there. This song was the band’s first single, released in 1978. The disc concludes with “Whatcha Gonna Do?” which also has a great bass line. It’s an excellent song, and “Whatcha gonna do?” is the question, isn’t it? What can we do? “If you’re thinking that you’re nothing, you already are.” Doesn’t it feel like everyone is waiting for someone to tell us what the hell we can do?