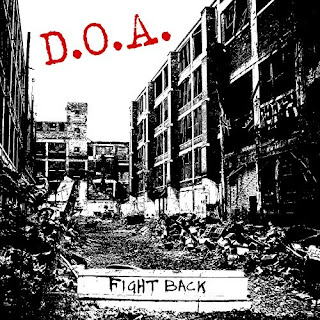 The world is in a depressing and dangerous state, and anyone who is even remotely conscious wants to just scream at nearly every moment. There is so much to scream about, and every day we’re given a dozen fresh hells, thanks to that repulsive racist Donald Trump and his gang of corrupt cretins. It is the perfect time for some good hardcore punk, and the new album from Canada’s D.O.A., Fight Back, is just exactly what we need. They give us a whole lot of truth, and they deliver it hard and fast. Truth we can shout, music that might motivate us to actually do something. Or, at the very least, make us feel a bit better by letting off some steam. D.O.A. has been touring and putting out albums since 1978, and after forty years they show no signs of letting up here. The music on this disc is vibrant and exciting and fun and energizing. With one exception, these tracks are originals, written by vocalist and guitarist Joe Keithley.

The album gets off to a good start with “You Need An Ass Kickin’ Right Now,” a lively tune to get you on your feet. And check out these lyrics: “Yeah, you make me sick/When you start to spin your shit/The lies come out your lips/On your psychotic power trip.” It’s a short song, not even a minute and a half, but is perfect. By the way, the band put out a good video for this song. I don’t normally give a shit about music videos, but this one makes a statement and is definitely worth checking out. And some of the people shown in it – like Betsy DeVos and Donald Trump – are people I would personally like to smack. They deserve a serious ass kicking. That song is followed by “Killer Cops,” which contains a reference to “Bad Boys.” “What ya gonna say to your conscience (it makes me sick)/What ya gonna do when they come for you.”  “Time To Fight Back,” the album’s title track, is one of the best. This is one you’ll be singing along with, and it’s designed for that, working almost like a folk song at the beginning. “It’s time we all fight back/’Cause we’re always under attack/And if we want a taste of freedom/Then we’ll all fight back.” And in fact, a few lines toward the end might bring to mind some of Woody Guthrie’s lyrics.

Another of my favorites is “Just Got Back From The USA.,” with the repeated line “Hey, hey, get out of my way, I just got back from the U.S.A.” There are a lot of good songs about the current administration, songs inspired by its unrelenting and unabashed spouting of total horseshit, songs touching on its brazen racism. This one captures the energy and attitude of the country. Check out these lines: “There’s racists marching in the street/‘Cause the White House is paving the way/They’re rubbing their crotches and shooting their guns/So you better watch out, watch out today.” And then in “Gonna Set You Straight,” they sing “Well, I’m gonna set you straight, you son of a bitch/And I don’t care if you’re stinkin’ rich/’Cause you don’t mean jack shit to me.” Oh, how I hope someone sets every last member of Trump’s administration straight. This is a good, angry song, matching the way so many of us feel these days. That’s followed by “State Control,” which has a similar energy. This one is a call to resist those forces that believe they have us. It touches upon those seemingly ever-present surveillance cameras and social media. “If you don’t resist, there’s fuck all you can do.” It’s frightening.

“The Last Beer” has a different feel. It is a kind of fun, bouncy tune (seriously), and it’s bloody great. This song is a fond look back at a friendship with someone who died too soon, and it is a surprising favorite of mine. “I remember when we had no fear/We’d shoot the shit and down some beer/And consider life for what it’s worth/But now you’ve gone and left this earth/I miss you, my friend, you crazy fool/Now memories will have to do.” I love the joy (even if it is tinged with sadness) and innocence to the sound of this one. The only cover on the album is “Wanted Man,” written by Bob Dylan and originally recorded by Johnny Cash. D.O.A. does a damn good rendition. This isn’t the first time D.O.A. has covered Dylan. The band also recorded “The Times They Are A-Changin’” and “Masters Of War.” The album then concludes with “World’s Been Turned Upside Down,” a strong look at the current state of things, opening with the line “All the guns and all the hatred,” which is sadly so damn pertinent every day. And check out these lines: “Our morals have abandoned us and justice does not exist/Where do we go from here, do we hide our heads and drown in tears/The world’s been turned, turned upside down.” But it does contain an optimistic note, which I appreciate. “The fascists are back, have we gone blind/It’s a struggle to stay strong/But it’s always darkest before the dawn.”

CD Track List
Fight Back was released on May 4, 2018 on Sudden Death Records.
Posted by Michael Doherty at 9:58 PM