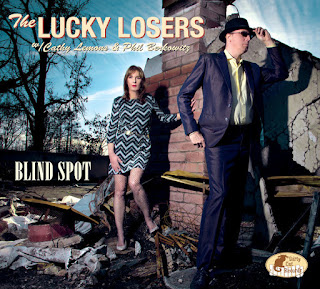 The Lucky Losers are a bluesy, soulful and fun band based in San Francisco. At the heart of this group are the two lead vocalists, Cathy Lemons and Phil Berkowitz, who wrote (with Danny Caron) all the songs on the new album, Blind Spot. They swap lead vocal duties, with Cathy singing lead on all the songs that she co-wrote, and Phil singing lead on the songs he co-wrote. The album title refers to the spot you can’t see in the rear-view mirrors, the dangerous spot, and in these songs there certainly is an element of danger, of the unknown. But the tracks are largely a lot of fun, and some of them would be good choices to accompany you on a road trip, mentioning highways and destinations and so on. This album follows 2016’s In Any Town, and unlike that one and the group’s debut (A Winning Hand), this disc contains all original material. In addition to Cathy Lemons and Phil Berkowitz, the group is made up of Ian Lamson on guitar, Chris Burns on keys, Endre Tarczy on bass, and Robi Bean on drums. There are also several guest musicians joining them on certain tracks.

They kick off the new CD with “It’s Never Too Early,” written by Phil Berkowitz and Danny Caron. I could, as always, do without the rain sound effect at the beginning. But once the song actually starts, it’s really good and features a very cool, classic groove. There are plenty of lines that stand out, such as “It’s never too early to sleep/When you’re living in a dream,” the first lines of the song. And check out these lines: “Straight ahead until we’re dead/There ain’t no looking back/The path to your heart has been heavy/But it’s got a strong foundation/All roads will lead me back to you/If there is no hesitation.” Oh yes. There is some nice work on keys, plus good stuff by Phil Berkowitz on harmonica. I just love the overall feel of this one, sounding like a band singing directly to you from the side of the road as you travel through a slightly strange landscape in a time all its own. It’s marred only by the “self”/“shelf” rhyme near the end, and a return to the rain sound effect. That’s followed by “Take The Long Road,” a bluesy tune written by Cathy Lemons and Danny Caron. “Nobody gave me nothing, that’s a fact/I had to pull myself out of a ditch with a knife in my back.” How’s that for a good blues lyric? There is also a dance element to this song, with a bit of a disco vibe to the rhythm. And there is more nice work on harmonica.

“Alligator Baptism” is fun, and it too has something of a dance vibe. It also has a whole lot of soul, plus a horn section, which is fantastic. The horns really add a great element to this song, taking it to another level. Nancy Wright and Jack Sanford play saxophone, and John Halbeib is on trumpet. “A little more soul, and lot less jive/What’s going to stop me from digging in too deep/Who’s to say what it takes to survive/Let the muse play the song for your soul to keep.” And I love that lead on harmonica in the second half of the song (I wish it went on a little longer). This track is really working on me and for me. It’s a song that might make you cooler just for listening to it. So there. And it’s followed by another seriously cool tune, “The River.” This one has a slower groove, with plenty of soul. Cathy Lemons wrote this one. “When you came/You reached your hand out/Said here I am/Now you’re holding me/I won’t let you/Sink in this old river.”

“Bulldogs & Angels” establishes a classic soul sound right from the start. It has kind of an easygoing feel, and I like the way Phil Berkowitz delivers the vocals. “Don’t know where I’m going/Don’t know what I’m going to do/But I’ll hold onto this feeling/’Til I find someone like you/To bring it on out.” And I dig those “ooh” backing vocals. And then two and a half minutes in, we get the addition of some gorgeous, joyful work on saxophone.  Ah, yes, it just gets better. That’s Nancy Wright on saxophone. The ending with saxophone and harmonica is fantastic! I also like “Last Ride.” It’s a more serious tune, with something of a harsher tone, with lyrics about some horrific recent events, including the Las Vegas shooting, as well as that church shooting that left twenty-six people dead. It disgusts me that there are people who are still against strict gun control. Kid Andersen plays rhythm guitar on this track. “It may the last ride, the last ride of our lives.”

“Love Is Blind” has a slow disco dance groove that kind of pulls you in. Cathy delivers a powerful, passionate vocal performance, which has something of a classic sound. “I wanted somebody/To be by my side/Now I feel no pleasure/Maybe it’s just my pride.” Kid Andersen plays lead guitar on this track. The CD then ends with a song that both Cathy and Phil co-wrote with Danny Caron, the only track that both singers had a hand in composing. Titled “You Left It Behind,” it is delightful right from the beginning, a playful duet about traveling together and forgetting things, in which they tease each other about moments that might very well be from the group’s actual history. “Baby, you remember that time we were in downtown Memphis, and you left your suitcase lying in the street?” It’s a shame that they bleep out the word “fuck” at the end when Cathy says “Oh, for fuck’s sake.” That is pretty lame. I think if for some reason they didn’t want to leave the word in, but didn’t want to cut the line entirely, then they should have had the harmonica suddenly come blaring in over it, like Phil is trying to keep Cathy from getting the last word.

CD Track List
Blind Spot is scheduled to be released on May 18, 2018 on Dirty Cat Records.
Posted by Michael Doherty at 5:24 PM