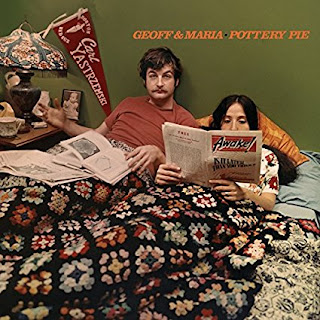 Before Maria Muldaur became known for “Midnight At The Oasis,” she and her husband Geoff put out two albums. The first, Pottery Pie, was released in 1968 (one of the best and most interesting years for music, in my opinion). At that time, both Geoff Muldaur and Maria Muldaur were known for their work in the Jim Kweskin Jug Band. The album features all cover songs, and contains a good mix of folk and country and gospel and blues, with Geoff and Maria taking turns at lead vocals. Surprisingly, it has never before received an official CD release in the United States. (How is it that there are still albums this good that haven’t received CD releases? It’s baffling.) This CD release contains new liner notes, focusing on interviews with Geoff Muldaur and Maria Muldaur, in which they give their thoughts on various tracks. The band backing them on this album includes Bill Keith on pedal steel (Bill Keith has also played with them in the Jim Kweskin Jug Band), Amos Garrett on lead guitar, Billy Wolf on bass, Rick Marcus on drums, and Billy Mundi on drums. There are also horns on certain tracks. I don’t usually make much mention of album covers, but I love the photo that is on this album, mainly for the Yaz pennant on the wall. He was my favorite player when I was growing up, and he signed a ball for me when I was in the hospital. Go Sox!

The album opens with “Catch It,” a song written by Eric Von Schmidt, with Geoff on lead vocals. It’s a good, somewhat slow number with some memorable lyrics, like these lines: “If you want a gushing geyser/You have to dig yourself a bunch of dusty, little holes/And if you want good, good loving/You’ve got to love with a little soul.” That’s followed by a nice, relaxed country rendition of Bob Dylan’s “I’ll Be Your Baby Tonight,” with Maria on lead vocals. She delivers a delightful, somewhat playful vocal performance. I like this rendition a lot, though I think my favorite remains that by Rita Coolidge. Then Geoff sings lead on “New Orleans Hopscop Blues,” an older tune perhaps still best known for the recording by Bessie Smith. This is an interesting rendition, with horns and wonderful backing vocals.

Maria sings lead on a pretty, gentle and honest rendition of “Trials, Troubles, Tribulations” a folk and gospel tune. Betsy Siggins provides some backing vocals. That’s followed by “Prairie Lullaby,” here oddly misspelled as “Lullabye.” This is a country tune written by Billy Hill and recorded by Jimmie Rodgers (and by many other artists since then, including Michael Nesmith). Geoff does an excellent job with it, adding a spoken word section in the second half of the song. I love the fiddle. Then Maria performs “Guide Me, O Great Jehovah” a cappella, delivering a beautiful version. This song has a few other titles, including “Guide Me, O Thou Great Redeemer.” They then give us a lively, fun number titled “Me And My Chauffeur Blues,” also with Maria on lead vocals. She gives a totally enjoyable and varied performance here, helping to make this one of my favorite tracks.

The album then takes another strange and delightful turn with “Brazil,” a song I absolutely love. Of course I can’t help but think of Terry Gilliam’s fantastic film whenever I hear this song. But this version in particular calls the film to mind since it is in fact the version heard in the film. I didn’t know that the recording heard in the film came from this album, and am excited to now have it on CD. Geoff talks a bit about it in the liner notes (and hints that there are several more anecdotes regarding this recording, anecdotes which I long to hear). This is actually the first version of the song I ever heard, thanks to the movie. And every version I’ve heard since… well, I’ve wanted them all to be more like this one, which is totally playful. By the way, if for some reason you haven’t seen Brazil, you should make a point to get the DVD and watch it right away.

“Brazil” is followed by a sweet, timeless rendition of “Georgia On My Mind,” with Maria on lead vocals. The album then ends with a classic blues tune, “Death Letter Blues,” with Geoff on lead vocals. This one has kind of a bouncy rhythm, quite a bit different from most versions I’ve heard, and I totally dig it.

CD Track List
Pottery Pie was released on CD on March 30, 2018 through Omnivore Recordings.
Posted by Michael Doherty at 7:16 PM