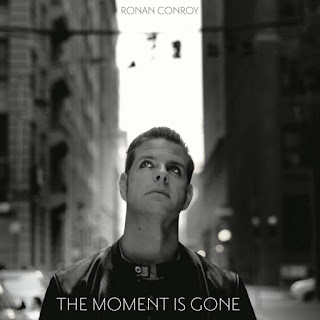 The Moment Is Gone, the new record from singer and songwriter Ronan Conroy, is the best release I’ve heard from him so far. It follows his 2017 EP, Blood Dread, and features mostly original material, written by Ronan Conroy, with one interesting exception. Joining him again is his Oh Halo band mate Charles Nieland, who on this record plays bass, piano, synths, lap steel, drums and percussion, and also provides backing vocals on one track. The only other musician beside Ronan Conroy and Charles Nieland is Justin Wierbonski, who plays on drums on a few tracks. The music on this record was written over the last several years, and features some excellent lyrics.

The record opens with one of its strongest tracks, and the one most recently composed, “Burn The Cane.” Ronan’s voice has some authority as well as passion; there is nothing timid or unsure here. I love the way it opens, with just his vocals and piano. Then when it kicks in, it takes on just a bit of a pop feel. “Nobody here is a victim/Can’t you see right through that?/I don’t like how you talk to me/How did we get from silence to that?” That’s followed by “Cordite.” This one might have a darker folk vibe, but shafts of light certainly make their way in at certain points, and those moments seem to have a bit of a Beatles influence. “We can’t be the ones/To carry what is not ours/Who are we to close/Wounds that are only yours?” Like I said, these songs features some seriously good lyrics.

There is an interesting dream-like quality to the vocals on “You’re So Cruel,” a song with a more full sound, which might add to that quality and might allow you to get swept up in it. I like that work on piano. “I don’t know if what I’m doing is a good idea/I don’t know if I care anyway/Is it me or is it you who brings the crazy?/Crazy for you anyway.” This is one of the tracks to feature Justin Wierbonski on drums. Ronan Conroy then changes gears with “Who Do You Think You’re Kidding?” This song features a more raw sound of just acoustic guitar and Ronan’s voice, which sounds so close to us, so personal, so intimate. “I got nothing, I got nothing for you, honey.” I love that slightly twisted laugh after the line “Who do you think you’re kidding.” This is one of my personal favorites, and I am absolutely crazy about Ronan’s vocal performance on this track. The guitar work, too, is really good.  It’s an excellent song. The first side of the record then concludes with “GuiltChild,” possibly the strangest song on the album. It opens with steady synth, and some odd strumming on acoustic guitar, and Ronan whispers urgently, “Wake up, wake up, wake up.” There is something undeniably powerful about this song. And yes, it is written as “GuiltChild” on the album, without a space between the words. These lines stand out: “Alarm! Alarm!/The drilling keeps up in the head/Nothing has any meaning.” It’s interesting to me that it ends as it began, with a forceful whisper of “Wake up, wake up, wake up.”

Side 2 opens with the album’s earliest composition, “Anger, My Love,” written in 2014. It has a somewhat different feel from other tracks. It comes on as a brighter alternative rock tune, but as you get deeper in, you get a sense of a darkness that is pumping beneath the surface and then rising up in Ronan’s vocals. After all, the main line is “Anger, my love: you are the beating of my heart.” This one also include a little jam, which comes as a surprise. This is another of the tracks to feature Justin Wierbonski on drums, as is the following song, “Evening Comes.” There is a sweeter sound to the instrumental section that opens this one. I love these lines: “I saw what you’ve done/Even if you don’t know what you’re doing.” He then turns it on himself: “I guess I’ll go on/Even if I don’t know what I’m doing.” And these lines are powerful and depressing: “I got nothing but regrets/Nobody’s here, I got no one to tell.” It’s an intriguing song, and one that conjures different images and feelings for me each time I listen to it.

“Psalm #40” might at first seem a strange choice, but it follows “Evening Comes” so well, with lines about one’s sins and needing mercy. This is the one track not written by Ronan Conroy, though he did adapt the lines for this song. He takes it from “Do not withhold your mercy from me, Lord/May your truth and your love always protect me,” which is more than halfway through the psalm. This track features some nice work on lap steel. The record then concludes with “Silence In The Cemeteries,” which has a pretty sound at its start. Then the acoustic guitar has a noticeable sustain. “The sea is sleeping/Sand settles in the cellar of the ocean/Waves kiss the beach/So safe from thought.”