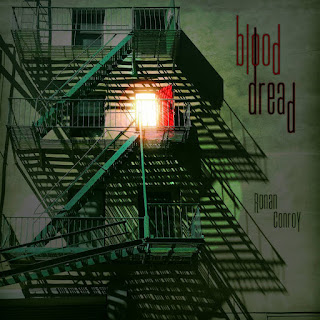 You might know Ronan Conroy from his work with Oh Halo, a New York band he was a member of for several years before he embarked on a solo career in 2014. Since he left that band, he’s released four CDs, the newest being Blood Dread, a five-track EP of all original material. In Oh Halo, Ronan played guitar and sang backing vocals, with Julie Dicterow taking lead vocal duties on most tracks. Obviously, in his solo work Ronan sings lead, and it is his voice that is immediately striking on this new CD.  It is deep and personal and hurt and haunted, without much ornamentation or obstruction by way of overproduction or embellishments. Take “Autumn Sun,” the CD’s beautiful lead track, for example. This song has a dark, haunting yet intimate vibe, Ronan’s voice accompanied and supported only by his guitar and by fellow Oh Halo band member Charles Nieland on piano (Nieland also produced this release). His voice grabs you and holds you. Plus, it boasts some good lyrics, like these lines: “Shadows move across the floor/We don’t live here anymore.” There is something so sad in those lines, the situation perhaps even more depressing than if this song were to take place at night. For who is to share in one’s heartache during the day?  This is a song of loss, and its last line, “Nothing beside me, just an empty space,” is certainly a downer. And the song ends right there. What else is there to say at that point? (By the way, there is a brief odd popping sound just before the line “Clouds are moving through the sky,” but that might just be my copy.)

It’s followed by “The Dark,” and this song’s title is not misleading. This one too has a dark, haunted feel in the vocal delivery, and in the music. Also, this song provides the EP with its title in the line “My head, the blood dread.” On this track, Ronan Conroy is joined by Charles Nieland on bass and synthesizer, and by Justin Wierbonski on drums. Then “Primordial” has a brighter sound right from the start. “And she is looking at you as the sun shines through her hair/In the close shot/And she is smiling at you as the lens of the camera blurs.”

As good and as compelling as these first three tracks are, the CD’s final two tracks are the ones that really stand out for me. “No Friends Of Yours” pulled me in immediately and held onto me, its repeated title line working almost as a strange mantra, along with its slow groove. “Mirror’s got something to say to me about/Words that I use that I don’t understand/Like ‘closing’ and ‘cutting’ and ‘curing’ and ‘friend.’” And then “Tonight,” which concludes the EP, is probably my favorite track. It features Charlies Nieland on bass and glockenspiel, and Justin Wierbonski on drums. Both provide some good work, but it is Ronan’s voice which really sells this one. And I love this line: “None of the choices felt like choices at all.” What’s interesting here is that though many of the lines might seem a bit depressing, this song ultimately has a positive, even optimistic feel, this CD leaving us with shouts of “Tonight!” And in those shouts I hear hope.

Track List
Blood Dread was released on March 11, 2017, and is available digitally.
Posted by Michael Doherty at 4:26 PM