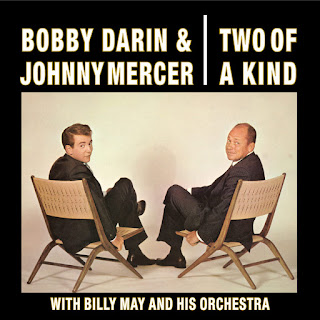 I was in the mood for something fun and light, and popped in the recent re-issue of Bobby Darin and Johnny Mercer’s Two Of A Kind. It turned out to be even better than I’d expected. Right from the start, it’s apparent that both singers are having a ridiculously wonderful time singing together, and their joy transfers easily to the listener. Seriously, this disc is a delight. The selections include some tunes that Mercer co-wrote, but the choices seem to have been made almost entirely based on how much fun they could have with them. Darin and Mercer also wrote one song together, the album’s title track. The arrangements are by Billy May, and the album was recorded with Billy May’s orchestra. This special expanded re-issue includes seven bonus tracks, all of which were previously unreleased. There are also new liner notes by Cheryl Pawelski, as well as the original liner notes by Stanley Green.

The album opens with an abbreviated rendition of the title track, a delicious big band number that sounds fairly straight until suddenly there is a playful pause in the action for a bit of stage banter. “I think we ought to do a standard, John.” The response: “Yeah, I think we ought to get to work.” And then, bam, they go into “Indiana,” written by Ballard MacDonald and James F. Hanley. They are clearly having a blast, tossing in some casual responses to certain lines, like “You know about that jazz” and “Sounds like it could be fun.” And toward the end, they deliver some scat. This track is just a whole lot of fun.

They follow that with “Bob White,” a song written by Johnny Mercer and Bernie Hanighen. This one too is delightfully playful. How can anything be wrong in the world when songs like this one are playing? The bonus tracks include a different take of this song, and that take features different word play. For example, in this one, the response to “neophyte” is “Where do you dig up those words you find?” rather than “John, what does that word mean?” (In the album version, John answers, “Amateur.”) So that shows you they were really in the moment, playing off each other, rather than delivering rehearsed banter. And I think that’s why the album is such a joy.

“East Of The Rockies” is a delicious, swinging number with some wonderful work on horns. It was written by Sid Robin and Lou Singer. There is an alternate take of this one as well in the bonus tracks. One of my favorites is “I Ain’t Gonna Give Nobody None Of My Jellyroll,” a breezy gem written by Clarence Williams and Spencer Williams. This rendition features more of their playful banter, as well as some fun, catchy playing by the band. The bonus tracks include a different take of this song, which lacks that added bit at the end. There is more delightful play between the vocalists on “My Cutey’s Due At Two-To-Two Today,” right from the start. In fact, the first line is an added comment, “Sounds like a train song if you ask me.” This one had me laughing out loud, and apparently I’m not the only one. At one point you can hear a laugh in the vocals (on “stayed home nights”). The bonus tracks include a different take of this one, and this take is totally enjoyable too.

“Mississippi Mud” begins with a bit of banter too, with Bobby asking, “Hey, John, you ever been to Mississippi?” John responds, “No, man, but I sure would like to visit down there.” And guess what? The bonus tracks also include an alternate take of this song. And the banter is different. John responds to that opening question, “Oh, that’s a little bit further south than where I come from, but I think I could manage it, Robert.” The original album concludes with its title track, and they first mention how they started to play it on the other side of the record. Here they give us the entire thing, without interruption. And it’s a sweet, innocent and completely enjoyable song. “What’s so wrong thinking life is a song/And reaching for a star/And who’s to say if we’ll go the whole way/At least we got this far.”

In addition to the bonus tracks I’ve already mentioned, this disc includes a wonderful rendition of “Cecilia,” which features plenty of joking around, even joking about joking, with comments like “Oh, we’ll be very big in Buffalo.” There is also a nice take of “Lily Of Laguna,” adding a little nod to Billy May to the lyrics.

CD Track List
This special expanded edition of Two Of A Kind was released on March 24, 2017 through Omnivore Recordings.
Posted by Michael Doherty at 11:13 AM