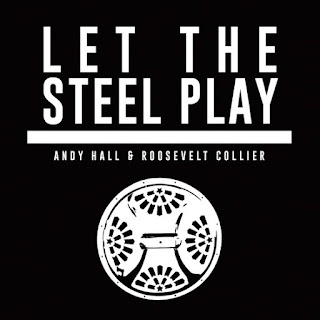 Wednesday afternoon, before the first of two Dead & Company shows at The Hollywood Bowl, I was looking for something to listen to, you know, to get in the mood. While I was considering some options, this disc by Andy Hall & Roosevelt Collier, Let The Steel Play, arrived in the mail, and the track list included the Grateful Dead’s “Crazy Fingers,” so I popped it in immediately. And it was just exactly what I was looking for – some damn good playing by two talented musicians. The album consists of instrumental tracks of some familiar material and some originals. Andy Hall is of course known as a member of The Infamous Stringdusters, but he’s also played with Phil Lesh. Roosevelt Collier is a member of The Lee Boys, and has also taken part in Grateful Dead tributes, including working with Unlimited Devotion. So perhaps it’s no surprise that they cover a Grateful Dead song on this release, their first album together. The project and the CD’s title come from their mutual love of slide guitar.

They get things off to a fun start with a lively take on “This Little Light Of Mine,” a traditional gospel song. And right away I’m digging the groove and the style and the energy. Life really can be perfect for the length of a song, and this tune ought to do the trick if you’re in need of having your spirits lifted. This song also certainly got me in the right mood to go out to catch some live music. This recording feels live; it has that fresh, immediate vibe, like they got one chance at it, and everything worked out beautifully. And the jam goes in some interesting directions toward the end, where some of the best work of this track is to be found. They follow that with another traditional tune, “Maiden’s Prayer,” which has a sweeter, gentler and friendly country sound. Things get a little more playful with “Singing Steel,” an original composition on which the two musicians deliver some delicious licks.

“Crazy Fingers” is the track that initially sparked my interest in this disc. It’s a song that originally appeared on Grateful Dead’s 1975 record Blues For Allah, and is one of my favorite Dead songs (okay, I guess I can say that about a whole lot of Dead tunes). It has a different feel from much of the Dead’s material, with a gentle reggae groove on the studio version. It also has some wonderful lyrics, the lines that always stand out for me being, “Gone are the days we stopped to decide/Where we should go, we just ride.” And, of course, these lines: “Life may be sweeter for this, I don't know/Feels like it might be all right.” Wonderful! Those lines aren’t in the version on this disc, obviously, but this rendition still retains that vibe, which has always felt very positive and sweet to me. I like this track a lot, and it has an interesting ending. “Rosebud” is an original tune, though it does feel a bit like another Grateful Dead song, “Liberty,” which happens to be the last song I ever saw the Grateful Dead perform. Only a certain section of this song reminds me of “Liberty.” This too has a very positive feel to it, which I appreciate, and a delightful ending.

“Remington,” another original composition, is a lively number with a certain bluesy edge. Though I love the positive, friendly vibes of most of this album, one of my favorite tracks is the more serious-sounding “The Darkest Hour,” also an original song. This one feels like it’s telling us a tale where not all the characters emerge unscathed, and some perhaps don’t emerge at all.  Anders Beck joins them for the CD’s final track, “Colfax Boogie,” a tune to get you smiling, grooving, tapping your feet or whatever it is you like to tap, and leaving us feeling good and satisfied.

CD Track List
Let The Steel Play is scheduled to be released on June 16, 2017.
Posted by Michael Doherty at 3:05 AM