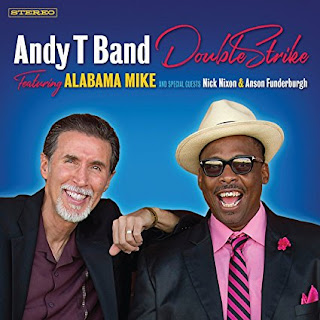 The Andy T Band is a cool blues band based in Nashville, with a delicious classic, timeless feel to their music. Their new album, Double Strike, features Alabama Mike on vocals on half the tracks. The band’s previous singer, Nick Nixon, provides vocals on the other tracks. He left the band last year for health reasons, and Andy includes a sweet note regarding his work on the back of the CD case. The CD contains a good mix of covers and original material. The Andy T Band is made of up Andy Talamantez (Andy T) on guitar, Anson Funderburgh on guitar (Funderburgh also co-produced the album with Andy T), Michael A. Benjamin (Alabama Mike) on vocals, Nick Nixon on vocals, Larry van Loon on piano and organ, Mike Flanigan on organ, Johnny Bradley on bass, Jim Klingler on drums and Greg Izor on harmonica. They are joined by the Texas Horns: Kaz Kazanov on tenor sax, John Mills on baritone sax and Al Gomez on trumpet.

They open the album with “I Want You Bad,” some classic rock and roll sounds mixed with blues, the results being totally delicious, and featuring good work on horns. “I want you bad, baby/I don’t want to be alone/I need you so bad, I can’t take it/Got me shook up, and I can’t shake it/Don’t know what I’m doing half the time/I got nothing but you on my mind.” Yup, I know that feeling, and it’s damn good. “I Want You Bad” was written by Tom Hambridge and Richard Fleming. And as you’d expect, this track features some good work on guitar. It’s followed by “Somebody Like You,” which was written by Larry Van Loon.  It’s a love song with a positive feel, and a great soulful vocal performance by Alabama Mike.  “I’ve been a bit rowdy/I’ve been a bit lost/This could be my time/You’ve been lonely too/Oh, I’ve been looking for somebody like you.” We need love songs these days; we need music to bring us together. And this tune features some good work on organ. Check out these lines (which feel just exactly right for these uncertain times): “Today wasn’t promised/And tomorrow’s not sure/But when it’s all over/When we all get through/I’ll be looking for somebody like you.”

“Deep Inside,” written by Andy Talamantez, is the first of the CD’s tracks to feature Nick Nixon on vocals. It’s a different sort of love song, as Nick sings, “I know that you really want me ‘cause I’m deep inside of you.” Hey, quit your bragging, man. Ah, but then he adds “I’m deep inside your heart.” Okay, I misunderstood. This song is fun and playful, and I love Greg Izor’s work on harmonica, which dominates the track. Nick Nixon also sings lead on “Sweet Thing,” which has more of a pop feel at the start, but with plenty of soul. “She wakes me every morning/She’s my sweet thing.” Depends on what time she wakes you, I suppose. “With a hug and kiss from a girl like this, it’s a brighter day.” Ah, to wake up every morning with the love of your life. What could be better? Well, the addition of saxophone certainly doesn’t hurt. Nixon also wrote this song.

Nick Nixon sings lead on a good cover of Chuck Willis’ “I Feel So Bad.” This song has always amused me, with the line “Feel like a ballgame on rainy day.” To follow it, the band chooses another 1950s Chuck Willis number, “Juanita,” and this track is one of my favorites, with its classic R&B sound and that wonderful work on horns. “Things got to get better.” I agree, and this album is certainly helping us in that direction. It’s making me feel better.

“Mudslide” is a catchy, groovy blues instrumental, the only instrumental track of the album, and it features some wonderful work on organ. The organ then leads the band into the next tune, “Sad Times,” an original number with a great, old-time feel. It was written by Nixon but features Alabama Mike on lead vocals. “I’m trying to learn to deal with these sad times that come around.” Aren’t we all? That’s followed by the very playful and totally enjoyable “Doin’ Hard Time,” in which he refers to his woman as his warden. “And you got me doin’ hard time.” I love the way Alabama Mike holds onto the word “hard.” There’s no question what he’s talking about, and those horns are sexy and swinging in support. “I’ll keep on loving you, baby/I’m wrapped up in your chains/I don’t want to be free, no/I’ll suffer with your pain.” Oh yes! The whole band is grooving beautifully on this track, and it’s one of my favorites.

It’s followed by another favorite, a delightful cover of Goree Carter’s “Drunk Or Sober,” with Nick Nixon on vocals. “I love her drunk or sober/And there’s no one to take her place.” And that sax sounds so good. Then “I Was Gonna Leave You” is a fun song about wanting to be the one to initiate a break-up, but being beat to the punch. “The day you left me, I was gonna leave you.” Of course, perhaps he’s just saying that. Either way, this song features more great work on horns. The CD then wraps up with the energetic rock tune “Dream About You” and the wonderful classic-sounding R&B tune, “Where Did Our Love Go Wrong,” which has a delicious Fats Domino vibe.

CD Track List
Double Strike is scheduled to be released on June 16, 2017 through American Showplace Music.
Posted by Michael Doherty at 9:49 PM