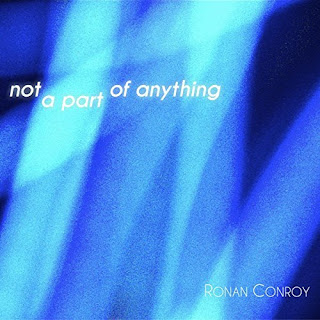 I’ve been listening to a lot of Ronan Conroy over the last week or so. His new release, Blood Dread, a five-song EP, has a compelling dark intimate sound, with the vocals and lyrics taking the focus. Its personal and often haunting sound pulled me in. Since I first listened to that EP, I’ve had the opportunity to go back and listen to earlier releases, and discovered that each CD has its own distinct feel, its own vibe. Take his previous release, for example, 2016’s Not A Part Of Anything. It has quite a different sound than Blood Dread, much more of a hard rock feel and attitude on many of the tracks. As on Blood Dread, Ronan Conroy is joined by his Oh Halo band mate Charles Nieland on bass, piano and synthesizer, and by Justin Wierbonski on drums. On this release, he is also joined by Chealsea Conroy on drums on two tracks, and by Satoshi Inoue (Echoscape) on bass on three tracks. All songs are originals, written or co-written by Ronan Conroy. In the liner notes, a year is written next to each of the song titles, and it seems that most of these songs were written a while ago, when he was with Oh Halo, and even before that.

This album opens with “Apart,” a song with a raw rock energy, a bit of punk in the delivery and its rhythm. Quite a bit different from the sound of Blood Dread, but perhaps equally compelling. Here is a taste of the lyrics: “Take a bow!/What a great performance, now/You arrive and leave without a warning/In the sun – we lay in the water/You asked me what was on my mind and in my heart.” His vocal approach is markedly different. And yes, I appreciate that the album’s title includes “A Part,” while the first track is titled “Apart.” That’s followed by another rock song, “Terms,” and here the vocals sound more like what I’d heard on Blood Dread, though the guitar and other instruments have at least as much power as the vocals. But that doesn’t mean the lyrics aren’t worth paying attention to. Check out these lines: “Come on, little darling, all the baggage that we’re holding – let’s let go/Holding on won’t do nobody no good/Catalogue and file all the crimes and the lies – we made mistakes/It doesn’t last, doesn’t matter, doesn’t change me and you.”

“Fire Escape” has a bit more of a folk vibe, but is still delivered with a raw, powerful and yet vulnerable feel, and is one of my favorite tracks. It creates vivid images right from its opening lines, “Through the bars across the window/Through the bars of the fire escape/Bleak tall towers stop the sunlight from coming in/Your sad face in the shadows.” There is something desperate and sad about this song, about this character, and yet you somehow know he came through it. After all, he’s singing of these things from a certain perspective. Perhaps escape is possible. That’s followed by “Driving South,” an intriguing track with some good lines, like “Whose opinion are you wearing now?/Paralyzed by your fear of ghosts/You and I – are we circling the drain/Or are we orbiting the stars?” Partway through, this song takes on a harder rock feel briefly, with that electric guitar taking prominence. That line “You couldn’t keep all of your promises if you tried” strikes me each time I listen to this track, because of course it implies that she didn’t try.

“You Little So-And-So” is a heavier punk song, delivered with a snarl, with disdain and anger. If you’re feeling angry these days – and who isn’t – you can enjoy this song while thinking of whichever bastard is irritating you (there’s no question just which orange menace I have in mind). “The neighbors on the street know it/The pole-dancers at 13th Street know it/The telephone solicitor knows it/The bouncers at the door know it.” Oh yes, it comes at you fast and strong, just as it should. There is something raw and deliberately messy about this one, as the emotion of it is in control, so it can’t be clean. You know? Of course you do. “Capitulation Advance” has a heavy rock vibe, with something closer to a hardcore punk energy, particularly in the vocal delivery. It then slides right into “Song #1,” and a good groove emerges. “So sick of being lied to/Why do I even care?” It’s hard to keep the current government from mind when hearing lines like that, regardless of what the actual topic is. Chealsea Conroy plays drums on both “Capitulation Advance” and “Song #1.”

“Memory Afterbirth” is a darker acoustic tune. This song, more than any of the others on this CD, contains a hint of the direction he’d be taking on his next release, and is one of my favorite tracks. “Beyond the point of no return/Beyond the point of anger/There is nothing left to burn/I don’t have your answer.” The CD then concludes with its title track, “Not A Part Of Anything.”