Tom Brumley And The Buckaroos: “Steelin’ The Show” (2018) CD Review 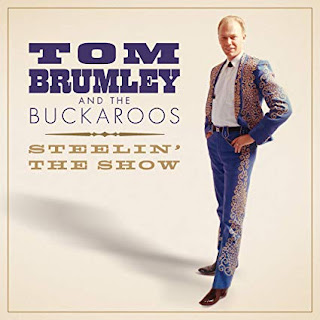 Buck Owens And His Buckaroos were one of the best and most influential country acts going. One of the important elements of the band was pedal steel player Tom Brumley, who was with the band from late 1963 to late 1969, playing with Buck Owens and also on the Buck Owens’ Buckaroos recordings that actually don’t include Buck Owens. Steelin’ The Show showcases his contributions to the band, focusing on material that highlights his playing. So these are instrumental tracks, most of them composed by Tom Brumley. There is one important exception, that being “Together Again,” for no album of Tom Brumley’s work would be complete without that song. The tunes come from albums that were released between 1964 and 1969, such as America’s Most Wanted Band and A Night On The Town. Tom Brumley left the band at the end of 1969 to join Ricky Nelson’s band. The liner notes for this compilation were written by Randy Poe, and also include notes from Tom Brumley’s family.

This collection opens with “Tom Cattin’,” a tune written by Tom Brumley and Buck Owens and first appearing on the Buck Owens LP Roll Out The Red Carpet. This track features some good, joyful playing on pedal steel, obviously, but also features a good lead on fiddle. It is Tom’s work on pedal steel that drives this tune. Things keep moving with the delightful “Steel Guitar Rag,” which was composed by Leon McAuliffe, Merle Travis and Cliffie Stone, and included on Buck Owens’ Before You Go/No One But You. Ah yes, this music ought to raise your spirits, put a little dance in your step as you make your way through your day. That’s followed by “Bud’s Bounce,” which was recorded during Tom Brumley’s very first session with Buck Owens, and appeared on the 1964 LP I Don’t Care.

“The Neosho Waltz” is a sweeter, slower number written by Tom Brumley and Don Rich, and is the first of this collection’s tracks to not include Buck Owens. This tune is from the Buck Owens’ Buckaroos album America’s Most Wanted Band, released in 1967. Tom’s work here is beautiful. That’s followed by another track from that same album, “Steel Guitar Polka,” a fun, kind of bouncy tune written by Tom Brumley. “Seven Come Eleven” is also from America’s Most Wanted Band, and is a groovy, somewhat relaxed number. This one was written by Tom Brumley and Don Rich. We then get a few tracks from The Buckaroos Strike Again, another album without Buck Owens, beginning with the enjoyable “Free And Easy,” also composed by Tom Brumley and Don Rich. Then “Tom’s Waltz” is a sweet and tender waltz. After all, Tom Brumley was known as “Tender Tom” (that was Buck Owens’ nickname for him), and you can hear that gentle sensibility on this track. His playing is beautiful and just exactly right. This track features some nice stuff on piano too. The last track from that album on this compilation is actually the album’s first track, “Apple Jack,” a ridiculously fun and playful number. Yes, life is good.

This disc includes a couple of tracks from A Night On The Town, released in 1968. The first is “The Waltz Of The Roses,” another pretty and sweet track. The second is “Pedal Patter,” a fun, fast-paced country gem, designed to bring a smile to even the most dour of faces. Both were written by Tom Brumley. Meanwhile Back At The Ranch was also released in 1968 (yes, this band was busy). Two tracks from that album are included here. “Tracie’s Waltz” is moving and sweet and touching and beautiful, one of my favorite tracks. It was written by Tom Brumley. Then “Runnin’ Short” is a lively folk number written by Tom Brumley and Bob Morris.

“Highland Fling,” written by Tom Brumley and appearing on the 1969 LP Anywhere U.S.A., is the only track on this compilation to feature on Tom on dobro, and it is another highlight. It’s a cheerful, peppy song. Two other tracks from that album are included on this disc. “Moonlight On The Desert” has something of a 1960s pop vibe, with a hint of psychedelic folk-rock influence, and I totally dig it. It is yet another of my favorites. “March Of The McGregor” also has a strong late 1960s feel. This one features the drums prominently; it is a march, after all. And it was written by Tom Brumley and Jerry Wiggins, the group’s drummer. The disc then concludes with the only track to feature vocals, “Together Again.” This song is from the 1964 Buck Owens And His Buckaroos LP Together Again/My Heart Skips A Beat, and it has what is considered to be one of the best pedal steel solos in the history of country music. It is a thing of beauty. So naturally this song is a fitting conclusion for this wonderful compilation.

CD Track List
Steelin’ The Show was released on December 14, 2018 through Omnivore Recordings.
Posted by Michael Doherty at 11:16 AM