The Mimosa Music Series continued today with a fun set by Love, the band known especially for its 1967 LP Forever Changes, which has been noted as one of the best rock albums ever. Obviously, it is not the original lineup. But you know, the original lineup was only together for three albums. After Forever Changes, the records featured just one original member – Arthur Lee. So now the band features one original member – lead guitarist Johnny Echols. The other members performed with Arthur Lee in the 1990s and into the next decade, and this lineup has been consistent for a much longer time than the original lineup, or any other lineup for that matter. And these guys are great. Besides Johnny Echols on lead guitar, the band is made up of Baby Lemonade members Rusty Squeezebox vocals and guitar, Mike Randle on guitar, David Green on drums, and Dave Chapple on bass.

Word had clearly gotten out about this show, because the line was fairly long more than a half hour before the doors were scheduled to open. And fifteen minutes after they opened, the place was packed. There was a buzz in the room; folks were definitely excited to be there for this show. I certainly was, and after a couple of mimosas, even more so. At 11:25 a.m., concert series host Gary Calamar introduced Dylan Rodrigue, who opened the show. I had seen him perform recently with Sie Sie Benhoff at the Roots Roadhouse Festival. Today he performed a (mostly) solo set on acoustic guitar, playing some originals as well as nice renditions of Daniel Johnston’s “True Love Will Find You In The End” and Blaze Foley’s “Clay Pigeons.” Sie Sie Benhoff joined him on vocals for the last three songs of his set. He finished up with “It’s So Funny,” a sweet, beautiful song from his new album. His set ended at 11:53 a.m.

Then at 12:05 p.m., Gary returned to the stage to introduce Love. They came out and wasted no time, kicking off the set with “A House Is Not A Motel,” from Forever Changes. The opening lines of this song seem like good words to tell someone on a first date: “At my house I’ve got no shackles/You can come and look if you want to.” This version rocked, and became a nice little jam. They followed that with “My Little Red Book,” which was great. Rusty Squeezebox shared vocal duties with Johnny Echols on this one. I loved that bass. Then Rusty introduced “Can’t Explain”: “This is called ‘Can’t Explain.’ It’s an old one.” He then quickly added, “They’re all old.” This one came at us with a power. That was followed by a mellower tune, “Orange Skies,” which was written by Bryan MacLean, and then by “Maybe The People Would Be The Times Or Between Clark And Hilldale,” from Forever Changes.

The moment they started “The Daily Planet,” also from Forever Changes, the crowd responded. This audience seemed to be right with the band every step of the way, which was cool. Love then went back to the first album for “You I’ll Be Following.” They followed that with “Your Mind And We Belong Together,” featuring some great stuff from Johnny on guitar toward the end, and then “Andmoreagain.” As Johnny tuned after that song, Rusty remarked, “A master at work.” And they went into “Alone Again Or,” the audience cheering as the first notes were played. This is probably the band’s most famous and beloved song. Even if you believe you’re not familiar with this band’s work, you’ve heard this song. It’s been featured in several movies, and has been covered quite a bit too. They followed that with another song from Forever Changes, “Bummer In The Summer,” bassist Dave Chapple taking lead vocal duties on this fun number.

Rusty brought up the new documentary Echoes In the Canyon, and Johnny explained why Love was not a part of that film. I haven’t seen it, but I’ve heard mixed things, the negative focusing mostly on the artists who were left out. That led to them playing “No Matter What You Do,” a song that Jakob Dylan and Regina Spektor apparently cover in the movie. Then, after “Are We Okay,” Rusty Squeezebox told the audience: “This is not often performed. So consider yourselves warned.” And the band went into “The Good Humor Man He Sees Everything Like This,” a sweet and cool tune, certainly a highlight of the set. “Live And Let Live” featured some great stuff on guitar. After that, requests were shouted out for “August.” Rusty Squeezebox said they weren’t going to play it today, but they planned to do on the upcoming tour in Europe. So anyone reading this in Europe, you might be hearing this band perform “August” soon. What they played instead today was “The Red Telephone,” another excellent song from Forever Changes. The set then concluded with “You Set The Scene,” also from Forever Changes.

When the band returned for an encore, more requests were shouted out, including “Stephanie Knows Who” and “7 And 7 Is.” A harmonica player joined them for a good rendition of the bluesy “Signed D.C.” That was followed by “7 And 7 Is,” which began with a force, and seriously rocked. A great closing number. The show ended at 1:27 p.m.

Set List
Encore
Here are a few photos from the show: 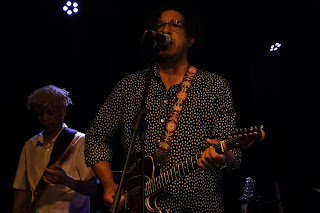 The Federal Bar is located at 5303 Lankershim Blvd. in North Hollywood, California.
Posted by Michael Doherty at 7:13 PM