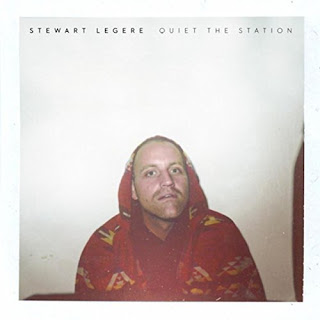 On a day when I’ve become completely disgusted with the entire Republican Party and even more horrified by the actions of our so-called president, I am incredibly grateful to Stewart Legere and the music on his debut solo CD, Quiet The Station. Its calming and uplifting effects are greatly needed right now, when many of us are engaged in a daily battle against both despair and fury. It feels at times like a deep, calming breath, or like friends telling you things will be all right, that you’re not alone. I think this music might be just what a lot of us are looking for. Quiet The Station contains sweet, positive (but not sappy or cheesy) and emotionally engaging folk music, with pop elements. The vocals, and the style, sometimes remind me of James Taylor, and also occasionally of Aztec Two-Step.

I should point out that Stewart Legere is another artist based in Halifax. There is a whole lot of excellent music happening up there these days, and the musicians all seem to play on each other’s releases. You might know Stewart Legere from his work with The Heavy Blinkers. Late last year I reviewed a CD from Dark For Dark, featuring Melanie Stone from The Heavy Blinkers. Melanie Stone also sings on this release (and she took the photo that graces the cover). The Heavy Blinkers include Adam Fine, who is also a member of Bend The River. Adam has also played on albums by Norma MacDonald and Ronok Sarkar. And guess what? Adam also plays on this Stewart Legere CD. A vocalist who appears on that same Norma MacDonald CD, Kim Harris, joins Stewart Legere on this album as well, perhaps returning the favor after he sang on her 2014 release Only The Mighty. Anyway, you get the idea. There is clearly a thriving and impressive and collaborative music scene in Halifax. I’m hoping to visit the area later this year.

The album opens with “Wishes In Wells,” and right away I know I’m in good hands. The first line is “Currently this is the plan,” and I am already on board. It’s that word “currently” that does it for me. Like things could change at any moment. Isn’t that how we all feel now? Everything is uncertain. But putting that feeling into words like that line somehow eases the tension, even makes me smile. There is something beautiful about this song, and I appreciate the happy feel of the banjo. Kim Harris, Melanie Stone and Don Brownrigg all sing on this track. By the way, this song provides the album with its title. That’s followed by “Sabotage,” a tune with a good steady rhythm and a pop feel. That’s Benn Ross on drums. Benn has also played on albums by Magnolia and Corey Isenor.

“Dig Into The Dirt” is for me one of the album’s most powerful songs. It’s partly Stewart’s passionate and moving vocal delivery, and partly the presence of Laura Cortese on violin. “Let go the liars, but keep the drunks and the fools/Though they may break you down, they will tell you the truth.” Rose Cousins joins Stewart Legere on vocals on this track, and the blending of their voices is absolutely wonderful. I can’t get enough of this song. That’s followed by “Ordinary,” which has a pretty folk vibe, with some stunningly gorgeous backing vocals. These are the opening lines: “I’ll believe anything said with care/Your two lips, anything sent from there/So be careful what you sell me/And be careful what you say.” And the song builds beautifully from there. “Every day is a story/Every day is another ‘I’m sorry.’”

“Carry The River” is another track that moves me. It’s folk with soul, and is effective. “You said I’ve got to stay with you/Not because I love you, but because I’m scared.” “If You Have The Time” likewise is a strong track, with Stewart on keys. “If you think you could come over/I could meet you anywhere/Underneath the roses will do/Or the path behind the stairs.” Jenn Grant joins him on vocals for this one.

“Two Old Songs” is another personal favorite. This one has a friendly vibe, in the way Stewart sings it, and it makes me feel good, and I can’t overstate how much I appreciate that right now, in this dark and lonesome night. “You can’t have no more time/Locked away behind this heart of mine/Where you claim you’re just passing through/’Cause that’s a lie/But I’m all right/And I could stand to be alone at night/Because I got two, I got two old songs.” “When I Was The King” features some glorious backing vocals. The CD then concludes with “Moving In Blues,” another of this disc’s highlights (well, actually, there are no weak tracks on this album). “These arms an open cradle for you/I will scale your walls, climb your hills, fly your mountains/Blaze a trail through the mist of every morning/For you.”

CD Track List
Quiet The Station is scheduled to be released on April 21, 2017.
Posted by Michael Doherty at 11:59 PM