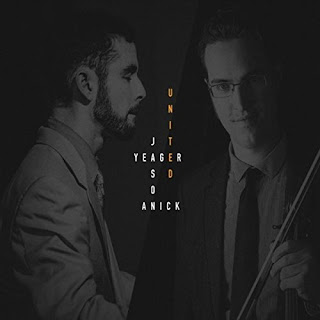 Jason Anick is a violinist and mandolin player interested in expanding the boundaries of jazz, or perhaps eliminating them altogether. Jason Yeager is an accomplished pianist and composer who has put out two albums with his trio. Both musicians have played with a wide variety of artists, and now they’ve teamed up for United, an album of mostly original material that doesn’t seem restrained or constrained by any outside view of what constitutes jazz. There are also four covers, including two pieces written by violinist Zbigniew Seifert. Joining the two Jasons on most tracks are Greg Loughman on bass and Mike Connors on drums. Also joining them on certain tracks are John Lockwood on bass, Jerry Leake on percussion, Jason Palmer on trumpet, Clay Lyons on alto saxophone and George Garzone on tenor saxophone.

This album opens with “Achi,” a beautiful and light piece written by Jason Yeager.  While so many of us are anxious and angry at the ongoing horror from the capital, music like this provides an important reminder of the beauty of the world, and of people. It helps ease the tension, and gives us something truer to focus on. I love the way this tune builds toward the end, becoming a strong voice.  It’s followed by “Bird’s Eye View,” written by Jason Anick. This tune is uplifting and even playful. Listening to this music, it seems impossible that a racist twit and his gang of incompetent fascists are running (and ruining) the country. It just doesn’t seem possible. Sorry to keep mentioning this. Friends tell me I need to put it out of mind, and that is one reason I turn to this music. I love the freedom of this music, and perhaps it’s that characteristic, as much as its beauty, that puts it in such great contrast to the horrible reality imposed on us from Washington, D.C. And maybe it’s why I keep feeling that music will defeat Donald Trump, why I keep searching for that right song, that right composition, which will swiftly put an end to this administration. Could this be it? I love the way the violin seems to soar weightlessly, moving in whatever direction its heart suggests. And then Clay Lyons adds a delightful lead on alto saxophone. This track is a favorite of mine.

“Well Red,” also written by Jason Anick, feels like it has its own tale to tell. Close your eyes, and you might see a film playing out in the darkness, with characters caught up in some delightful madness, cheerful with their situation, running with it, and then suddenly catching a breath in an alley or in a bedroom, a somber moment dominated by the piano, and things change, clowns become dramatic characters, even lovers, until the business of the outside world catches them up in its wings again. Jason Palmer plays trumpet on this track. Again, I’m grateful for any music that can transport me, even for a little while, away from this reality, and particularly to music like this that takes me to a place I actually want to visit, as does “Stillness,” one of the two Zbigniew Seifert compositions. The other is “Turbulent Plover,” which begins with saxophone and drums, the feel of it making me think of certain early 1960s films, and I imagine a city at night in black and white, people who maybe don’t realize they’re on camera, lights of storefronts, and we finally see our main character. But very soon that changes, as the tune takes form. Interestingly, the lead on violin sounds like something that might ordinarily be played on trumpet or something. It’s fantastic and impressive. And then the saxophone comes back in for a good lead part. That’s George Garzone on sax.

While many of these tracks seem to be outside of easy categorization, “Harlem Hoedown” in some ways feels more firmly, solidly, in the normal jazz realm, with the trumpet’s dominance (that’s Jason Palmer again), and that great rhythm (Jerry Leake is on percussion). But of course it goes in some different directions from there, and features some really interesting and delicious work on piano. There is also some great stuff on bass. That’s John Lockwood playing bass on this track. “Harlem Hoedown” was written by Jason Yeager.

If forced to pick a favorite Beatles song, it would be “Something,” and Jason Anick and Jason Yeager deliver an interesting rendition of it on this CD. It begins gently, almost delicately, and I’m pulled in. This version has some surprises in store, particularly in the rhythm it takes on, and it features some really nice work on electric mandolin. By the way, Jason Anick has covered The Beatles’ “Come Together” with Rhythm Future Quartet.

“Sweet Pea” feels like a relaxed, late-night jazz club number, a lullaby to all those who don’t wish to go home, or who perhaps feel they are home. It was written by Jason Yeager, and features some perfect late-night piano work. And then with the addition of the violin, it becomes something else, growing into a kind of love song, a love song to the night and all of us that inhabit it. It’s beautiful and is one of my favorites. It’s followed by another Jason Yeager composition, “La Segunda,” which has a Latin rhythm. Jerry Leake is on percussion. John Lockwood plays bass on this track. The CD then concludes with a wonderful, kind of playful rendition of Miles Davis’ “All Blues,” a tune from his Kind Of Blue album.

CD Track List
United was released on March 10, 2017 through Inner Circle Music.
Posted by Michael Doherty at 2:11 AM