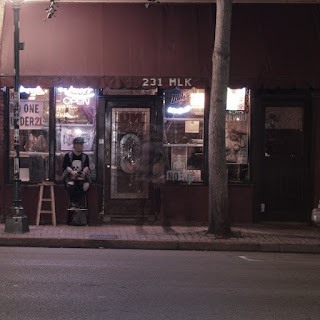 Dead Testaments are about to release a new CD, Mississippi Ave. It is their first release in three years, after the band took a break when drummer Matt Livingston had surgery to remove a non-malignant brain tumor. And if you think the darker feel of the new material is because of Matt’s experience, well, that doesn’t seem to be the case. The music of the band’s first release, 231 MLK, released in 2014, has a similar feel. Rather than, say, the bright feel of back porch folk, this is like late-night basement folk, with the lights down low – and  perhaps a purple lava lamp in the corner – and it is seriously good. The band includes Abe Houck on guitar and vocals, Matt Livingston on drums, Dave Maki on bass, Jeremy Southern on guitar and Allie Stafford on violin. Joining them are Drew Hamilton on trombone, Margaret Houck on vocals, Lorin Jones on trumpet, Ethan Key on saxophone and Stacy Newman on euphonium.

The EP opens with “Eyes In The Leaves.” It eases in, establishing a mellow, but intriguing atmosphere and vibe. It is intriguing, because at moments it has almost a comforting warmth, while at other moments it holds the possibility of danger, so you’re not certain if you’re safe in the world of this song. Interestingly, it is the work on drums that makes us feel that perhaps we’ll be all right. Also, there is a cool, late 1960s feel to the guitar at certain points. “Eyes In The Leaves” is followed by “Walking Backwards,” and right away it is the vocals that pull you in, the first lines delivered in deep, thoughtful, quiet tones, almost spoken, almost whispered. When the song then kicks in, it has already grabbed hold of you. Throughout the song, it is the vocal work that stands out, but I also really love the violin. This song has an interesting ending, with some unusual vocal play.

“Death Of Houston” has a good rock groove and delicious, deep vocals. There is something strangely catchy about this song, the repeated lines and sections make themselves a home in our heads, clearing out a spot in a corner and claiming it. And hey, we’re happy to have this music stay with us. I should point out that even the darker feel of certain sections isn’t depressing. Is it possible to be dark and uplifting? It seems so. My favorite track on this disc is “Cold Cold Lake,” in large part because of the vocals. There is something gorgeous and moving about this song. And after a minute or so, it kicks in with a haunting force that I love. Then halfway through, it goes in a different direction, the violin lighting the way, and this part is beautiful and emotional and it seems to create a strange landscape where the weight of people is rendered ineffective, and characters, rocks, trees float above the ground, and we can move slowly through them, or stand back if we wish. Everything is in motion around us. This is an excellent song to conclude the CD.