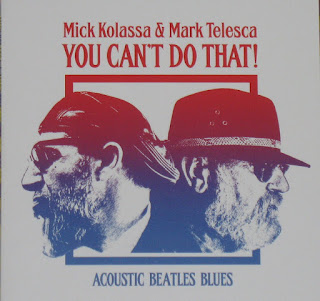 There have been a lot of tributes to the Beatles released over the years. The reason for that, of course, is that the music is so damn good. Like songs in the Great American Songbook, the music of the Beatles lends itself to a wide variety of interpretations. On You Can’t Do That! blues singers and guitarists Mick Kolassa and Mark Telesca team up to deliver some wonderful acoustic blues renditions of Beatles songs. Their choices include some of the band’s most well-known numbers, such as “Can’t Buy Me Love” and “I Feel Fine,” and also some songs that aren’t covered as often, such as “Why Don’t We Do It In The Road” and “Mean Mr. Mustard” into “Polythene Pam.” Joining Mick Kolassa (also known as Mississippi Mick) and Mark Telesca on this release are Jeff Jensen on guitar (Jensen also produced the album) and James Cunningham on drums and percussion. There are a few guest musicians who play on certain tracks.

Mick Kolassa and Mark Telesca open with the album with “I’ll Cry Instead,” which of course is a perfect blues title. The song was originally on A Hard Day’s Night. And on this CD, this song is given a cool groove, with some wonderful touches by Marc Franklin on trumpet. Yeah, it’s blues, but it’s blues with a positive, happy sound. “I’ll Cry Instead” is followed by another song included on A Hard Day’s Night, “Can’t Buy Me Love.” This song was also released as a single in 1964, and reached #1 on the Billboard Hot 100. Also a #1 hit for The Beatles in 1964 was “I Feel Fine.” Mick Kolassa and Mark Telesca deliver a very cool, slow rendition of this one. Eric Hughes adds some good work on harmonica.

They then dip into some later Beatles material with a powerful and moving rendition of “Fixing A Hole,” a song from Sgt. Pepper’s Lonely Hearts Club Band. On this version, they repeat “Where it will go” at the end of a stanza (well, that, or whichever line ends the stanza). They then go back to earlier material with “You Can’t Do That,” which was the flip side to “Can’t Buy Me Love” (and used as the title to this CD). And wow, listening to this version, it’s plain to see that this really is a blues song. It works so well. Seriously, it makes much more sense in a blues context than it does in rock or pop, with its theme of jealousy and with its threats of ending the relationship. Plus, there is some cool guitar work here. Eric Hughes plays both harmonica and guitar on this track. This is one of the album’s highlights.

Mick Kolassa and Mark Telesca deliver a groovy interpretation of “Got To Get You Into My Life,” and an interesting rendition of “Lady Madonna.” I love the addition of fiddle to the latter. That’s Tommy Boroughs on fiddle. No horns on this version. This is a laid-back, slow version of “Lady Madonna,” a song that was originally released as a single in 1968, another #1 single for The Beatles. This is another of the highlights of You Can’t Do That! It’s followed by “Why Don’t We Do It In The Road,” another song from 1968, this one appearing on The Beatles (the White Album). I like this version a lot; there is something kind of catchy about it. They then return to the earlier days with “She’s A Woman,” which had been the flip side to “I Feel Fine.” It’s interesting that Mick Kolassa and Mark Telesca include both sides of the “I Feel Fine” and “Can’t Buy Me Love” singles. I dig the rhythm to this rendition of “She’s A Woman.” Marc Franklin plays flugelhorn on this track.

They then conclude this acoustic blues tribute to The Beatles with three songs from the second side of Abbey Road: “Mean Mr. Mustard,” “Polythene Pam” and “She Came In Through The Bathroom Window.” The first two are presented as a single track, “Mean Mr. Mustard” having a good rock feel. Toward the end of “Mean Mr. Mustard,” when he sings, “Lord, he’s a dirty old man,” I can’t help but think he’s talking about Donald Trump. Something in the way the line is delivered. The pace is then slowed for “Polythene Pam,” giving it a very different vibe from the original version. On Abbey Road, this song leads straight into “She Came In Through The Bathroom Window.” Interestingly, though that song also follows “Polythene Pam” here, “Polythene Pam” actually fades out at the end. And then “She Came In Through The Bathroom Window” comes on strong, a delightful mix of blues and bluegrass, with Tommy Boroughs on mandolin. The vocals have a kind of amused, playful vibe, particularly on a line like “She could steal but she could not rob.” Though my favorite cover of this song is still that by Joe Cocker, I absolutely love what Mick Kolassa and Mark Telesca do with it here.

CD Track List
You Can’t Do That! is scheduled to be released on May 5, 2017 on Swing Suit Records.
Posted by Michael Doherty at 4:52 PM