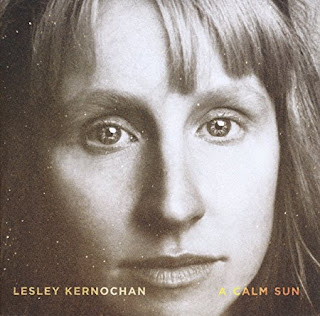 Lesley Kernochan is a talented singer and songwriter from Santa Monica, California. Her new release, A Calm Sun, features all original material, including a few songs that are among the best I’ve heard so far this year – “Hurricane Eye,” “Tumbleweed” and the CD’s title track. These songs are in the folk and country worlds. Joining her on this album are Dean Parks on acoustic guitar, electric guitar, pedal steel, banjo, dobro and ukulele; Christopher Bruce on acoustic guitar and electric guitar; Jeff Babko on piano and organ; Dan Lutz on acoustic bass; Aaron Sterling on drums and percussion; Ben Peeler on dobro, lap steel, pedal steel and mandolin; and Alisa Rose on fiddle. Tom Rhodes and Rob Waller (from I See Hawks In L.A.) join her on backing vocals. This is Lesley Kernochan’s third release, following The Pickle Jar and Undulating.

She kicks off this release with “Les petits mondes sont partout,” a sweet, gentle and innocent folk tune. “The big dipper is hanging/On the nose of this town/A music stand on the sidewalk/Is making out with the ground.” That’s followed by “Country In The City,” a country song about the joy of music, the first verse about zydeco, opening with the line, “There’s nothing better than a zydeco band.” She follows that with the lines, “Playing that music/Dance as hard as I can.” Oh yes. Last year I had the pleasure of dancing to some great zydeco at the Simi Valley Cajun And Blues Music Festival (oh, hey, that’s coming up again soon). But it’s not just zydeco that this song celebrates, but also independent folk and honky tonk music. The idea of “Country in the city” is something that of course I dig now that I live in a city. But when I was living in Oregon, and playing in a band, one of the first songs we wrote was called “Cowboy Hats.” Here are the lyrics in their entirety: “Cowboy hats/In the city/Look silly.” But hey, the feel of a city can change just by listening to certain music, as Lesley sings, “But it’s just a quaint home town/When you’re playing these tunes.”

And then we get into my favorite material of the album, beginning with “Hurricane Eye.” I love the feel of this one, the guitars and the vibe reminding me a bit of some of certain Byrds recordings, like “Wasn’t Born To Follow.” The music has a joyous and light sound, even as Lesley sings about learning from mistakes. These are the lines that grabbed me the first time I heard this song: “But I can’t keep writing you songs/Even I have to move on/Not that you care either way.” That’s followed by another favorite, “Tumbleweed,” which features an absolutely wonderful vocal performance by Lesley Kernochan. And then those backing vocalists humming really surprised and delighted me, like an old-time western tune. Rob Waller and Tom Rhodes provide those backing vocals. Plus, I dig the ukulele. This song makes me feel so ridiculously good. “I’ll take a rest in the sand/And dream about holding your hand/There is a smile in these warm salty tears/Oh, tumbleweed/Tumbled to the sea/California, you sweet home to me.”

The third of this CD’s excellent songs is the title track, “A Calm Sun.” It opens with these lines: “We think happiness is out on the horizon/That next job, that next love, that new stuff/Oh, pedal to the metal/Let’s drive this thing fast as we can.” We’re all guilty of that at some point, aren’t we? This idea is something that hit me even as a child, when Yoda said, of Luke, “All his life has he looked away, to the future, to the horizon, never his mind on where he was, what he was doing.” Not exactly the same thing, of course, but it’s all about being present in your own life, creating happiness now, or perhaps just recognizing it, something that is easier to do with the heart than with the mind. This is a beautiful song.

Then “Blown Away” begins gently, sweetly, with the lyrics deliver a cappella. When it kicks in, it retains its beauty, but the lyrics have a surprising humor to them, such as these lines: “Love you like a snake bite on my tongue/Love you like a monkey with two thumbs.” I enjoy this song so much that I can even forgive it for rhyming “self” with “shelf,” something that ordinarily drives me mad. And I appreciate the optimistic opening lines of the next song, “The Universe”: “There will be a brighter day/Darkness comes but doesn’t stay.” We can all use a bit of optimism these days, eh?

Another of this disc’s highlights is “Wherever I Go,” a beautiful and moving song. “Home/You’re always right here/Wherever I roam/Sky above and the ground below/Wherever I go.” I am also incredibly fond of “Old Fisherman’s Song,” which has a sweet and friendly vibe, opening with just vocals and acoustic guitar, and then building from there. “Sunset is on its way/Come on, let’s play.”

CD Track List
A Calm Sun is scheduled to be released on May 19, 2017 through Maple Syrup Music.
Posted by Michael Doherty at 7:17 PM