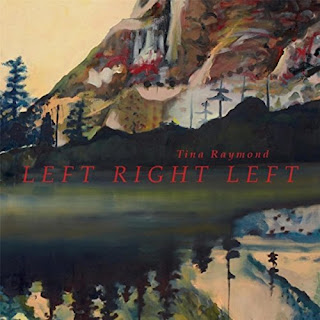 Jazz drummer Tina Raymond has played on several artists’ recordings, and has now released her debut album as bandleader. Left Right Left is an interesting album of patriotic songs and folk songs. It might seem an odd idea to do protest and folk songs as instrumentals, because the subjects being addressed in those songs are then lost unless you’re familiar with the tunes. But then again most people are likely familiar with Tina Raymond’s choices of material, including songs by Woody Guthrie and Pete Seeger. The band on this album is the trio of Tina Raymond on drums, Art Lande on piano, and Putter Smith on bass. Yes, she’s playing with two incredibly accomplished musicians. Putter Smith is also a songwriter, and the trio plays a couple of his compositions on this CD. The album’s title is a reference to the general political landscape of the United States, with folks on the left largely situated on the two coasts, and folks on the right being in the middle. Of course, that’s a generalization, as some places in the middle – Illinois, Colorado, Minnesota – lean to the left, and some places on the east coast – North Carolina, South Carolina, Georgia – lean to the right. The title also makes me think of military formation marches, with one guy calling out, “Left, left, left, right, left.”

Tina Raymond opens the album with Woody Guthrie’s “Pastures Of Plenty.” Woody Guthrie is one of the most important, prolific and influential songwriters in this country’s history. I believe that “This Land Is Your Land” is the true National Anthem, and it should be sung at sporting events and so on. Tina Raymond’s rendition of “Pastures Of Plenty” has a great vibrant quality, with some excellent work by all three musicians. It feels immediate, as it engages you, rather than feeling like it’s about long-past events. The song is about the plight and pride of migrant workers, and as such might remind of you John Steinbeck’s Grapes Of Wrath, the title of which comes from a line of “Battle Hymn Of The Republic”: “He is trampling out the vintage where the grapes of wrath are stored.” Whether it is for that reason or not, Tina Raymond follows “Pastures Of Plenty” with “Battle Hymn Of The Republic.”  It starts as a march, and then sort of deliberately devolves, fractures, just as the country is doing now. But what emerges is a delicious drum solo, followed by a cool bass solo, giving me hope that something wonderful will emerge from the current political state. Then they take up the main theme again, but it is still a twisted take on it.

America feels like it has in very serious and frightening ways ceased to be America. I joked with someone not too long ago that the Statue of Liberty was being taken down, and the person believed me. That’s the kind of reality we’re dealing with these days, where it’s actually not inconceivable that the Statue of Liberty would be removed. Certainly the poem at its base is no longer applicable or appreciated. And yet, listening to Tina Raymond’s take on “America The Beautiful” (here simply titled “America”), and hearing the lyrics in my head, I can’t help but think there is still beauty here, there is still majesty – in the landscape, in the people (not all of the people, of course – it’s difficult to imagine an uglier soul than that of the man currently pretending to lead the nation). And perhaps the so-called leaders might take a moment to consider a few lines of this song: “America! America!/God mend thine every flaw/Confirm thy soul in self-control/Thy liberty in law.” Tina Raymond’s rendition moves at a good pace, and goes in some interesting directions. It is certainly among the coolest versions I’ve heard.

Tina Raymond includes a second Woody Guthrie composition on this CD, “Union Maid,” delivering a very relaxed, mellow, late-night rendition. I don’t think I’ve ever heard it presented this way before. I’m used to robust renditions. But I do like it. She follows that with Joni Mitchell’s “The Fiddle And The Drum,” which was on Clouds, the first Joni Mitchell album I ever purchased. On that album version, Joni’s voice is unaccompanied, so it is certainly an interesting choice of songs to perform as an instrumental. But Art Lande’s piano sounds like a voice at times, as does some of Putter Smith’s work on bass here. The most beautiful and uplifting track on this disc is “Lift Every Voice And Sing.” This version is at times tender, and always emotionally stirring, and is one of my favorite tracks. The piano is the heart of this one, but there is a good bass lead, and I love the work on drums, especially toward the end.

There are two tracks written by bass player Putter Smith – “Xxmas In Baghdad” and “White Flight.” Perhaps it’s just because of the Christmas connection, but the beginning of “Xxmas In Baghdad” does remind me just a bit of Vince Guaraldi’s Peanuts music. But any similarity (if any indeed exists) disappears soon, and this piece has its own strong presence. “White Flight” teases at the beginning, then suddenly comes alive with a great energy, and even includes a good drum solo. This is one of my favorite tracks, and features some excellent playing by all three musicians.

There is something gentle and delicate in the trio’s delivery of Joan Baez’s “Saigon Bride,” a song from her Joan album. Tina Raymond concludes the album with Pete Seeger’s “If I Had A Hammer.” I’ve heard several unusual interpretations of “If I Had A Hammer” in recent years. Ruthie Foster’s sexy rendition jumps to mind. Tina Raymond’s version has a bit of swing to it, which is wonderful. It’s full of bright, positive and playful energy, and it contains a bass solo.

CD Track List
Left Right Left was released on April 7, 2017 on Orenda Records.
Posted by Michael Doherty at 2:52 AM