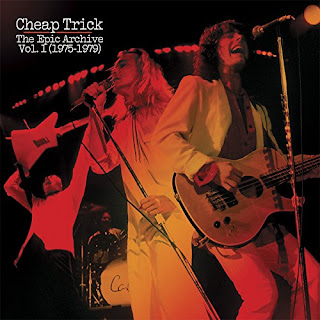 I’ve heard from many different people over the years that Cheap Trick puts on a fantastic concert. Somehow I have never managed to see them perform, even though I’ve been a fan of their music since I was a kid. I remember when I was ten, my family visited a radio station in Los Angeles – an easy listening station where my uncle worked at the time (I think the call letters were KJOI). The woman who gave us the tour could tell I wasn’t into the music playing over the speakers and she said to me, “You probably like Cheap Trick.” I confirmed her suspicions. Well, now with the release of The Epic Archive Vol. 1 (1975-1979), I get a chance to delve into some rare Cheap Trick tracks, including early demos and live recordings. This compilation includes liner notes with thoughts on the songs by drummer Bun E. Carlos.

This collection opens with three demos from 1975 – “Come On, Come On,” “Southern Girls” and “Taxman, Mr. Thief.” Versions of all three of those songs would end up on the band’s two 1977 releases, Cheap Trick and In Color. (And the demos of “Come On, Come On” and “Southern Girls” were included on the expanded edition of In Color.) Obviously, these early versions have a rawer sound. I especially like “Southern Girls,” one of my favorite early songs. This version of “Taxman, Mr. Thief” is significantly longer than the album version. I love the different intro here, with just drums before the guitar comes in.

“You’re All Talk” is a song that ended up on In Color, but apparently it had originally been recorded for Cheap Trick. That early studio version is included on this release (it was also included on the expanded edition of Cheap Trick). Similar to the official version, this track is really good. (This collection also provides a live version from 1977.) And it’s followed by an early studio version of “I Want You To Want Me,” one of the band’s most popular songs. This song was on In Color, but the version we always heard was the live one from At Budokan. I remember getting At Budokan on cassette. Didn’t we all own that album back then? I think so. It was that live version of “I Want You To Want Me” that got played on the radio. Still is, I think. Well, the song was recorded for the self-titled debut record, and it’s that version that is included here. It includes a slightly longer intro than the studio release version, and playful delivery of some of the lines. “Lookout” is a song that was included on At Budokan, but wasn’t initially included on a studio album, though it was recorded. The studio version is included on this disc. A second version of this song is also included – a live version from April 27, 1978 that was, before now, only available on a promotional CD. It’s a damn good version.

“I Dig Go-Go Girls” is an odd one, and I appreciate Bun E. Carlos’ thoughts on it in the liner notes. The instrumental version of “Oh Boy,” which was used as the flip side to the single of “I Want You To Want Me,” is also included on this release. There are also alternate versions of two songs from Heaven Tonight – “Stiff Competition” (a fun song about erections) and “Surrender.” “Surrender” is, of course, another of the band’s most famous tunes. It was an important song of my youth, one that demanded I crank the volume up on my stereo and dance around like a maniac. Who was I to refuse? This song was also on At Budokan, and it’s that version that I listened to the most when I was growing up. The alternate version included here is a lot of fun, and it includes some variations on the lyrics in the verse about the mommy being in the Women’s Army Corps, plus some additional joking at the end as the song fades out. It’s definitely one of the disc’s highlights. The alternate version of “Dream Police” included on this CD is a rough mix from before the strings were added. I think I actually prefer this version.

There are several live tracks in this collection. In addition to the ones I’ve already mentioned, there is a great version of “Goodnight Now,” here titled “Goodnight.” It might not have quite the same energy as the version from At Budokan, but it’s still a version definitely worth hearing. The single edit of “Ain’t That A Shame” is included. I’m glad to have this, but it is definitely weird to trim a live performance, and two minutes are cut from the At Budokan version. The last three tracks are all from 1979, and were originally included on Budokan II – “Stiff Competition,” “How Are You” and “On Top Of The World.”