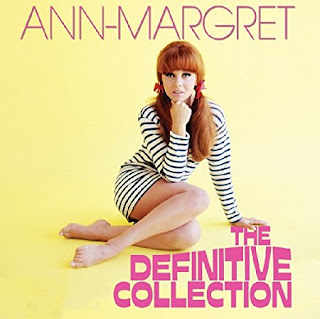 I think of Ann-Margret primarily as an actor (starring in films like Carnal Knowledge, Lookin’ To Get Out, and Kitten With A Whip), but of course her career began in music, and most of her early film roles were in musicals. The Definitive Collection is a two-disc set containing thirty tracks recorded between 1961 and 1966, and presented largely in the order of the recording dates. One of the tracks was previously unreleased, which is wild, because it’s one of the best songs of the second disc. This collection includes liner notes by Joe Marchese, with photos of the covers of her LPs (the back of the CD case features one of those sexy shots of her in that pink fur).

The collection opens with a good rendition of “Teach Me Tonight,” her take on it much sexier than the hit version by The DeCastro Sisters. Ann-Margret’s version was arranged and conducted by Marty Paich, and was included on her first LP, And Here She Is. That’s followed by “I Just Don’t Understand,” one of my favorites. In addition to her excellent vocal performance, this song features some great work on harmonica by Charlie McCoy. It was included on her 1962 album On The Way Up, and also released as a single, reaching #17 on the chart. Her version of “It Do Me So Good,” written by Willie Dixon and William Emerson, has a country flavor and some fuzz guitar.

Oh man, there is a moment in Ann-Margret’s rendition of “Heartbreak Hotel” where her voice just makes me melt. It’s the first time she sings the title line, “at Heartbreak Hotel.” Actually, that is only the first of several such moments. She delivers a delicious vocal performance here. Her version features harmonica, as well as good work on piano. Interestingly, that’s Floyd Cramer on piano, the same person who plays piano on Elvis Presley’s original version. Oddly, her version of “Fever” isn’t sexy. I was expecting to be blown away by her version of this one, and ended up a bit disappointed. It’s fun, to be sure, but isn’t one of those hot renditions. And she does something odd with her voice on this song, adopting an accent. “Heartbreak Hotel,” “Fever” and “What Am I Supposed To Do” were all included on On The Way Up.

“Bachelor In Paradise” is the title track from her 1963 LP. It’s not my favorite track, but her version is certainly better than the original, which was from a movie of the same name. Also from her Bachelor In Paradise album are “Mr. Wonderful” and “Let Me Entertain You.” Of the three tracks from this LP, “Let Me Entertain You” is by far the best. It is more playful than the others, as when she sings, “I’m very versatile.” The first disc also includes two songs from Bye Bye Birdie – “How Lovely To Be A Woman” and the title track. Also included is “Take All The Kisses,” the flip side to the single of “Bye Bye Birdie.”

I like Ann-Margret’s rendition of “I’m In The Mood For Love,” a song that was included on 3 Great Girls (a record of music from Ann-Margret, Kitty Kallen and Della Reese). The first disc then concludes with two songs she recorded with Elvis Presley – “You’re The Boss” and “The Lady Loves Me.” “You’re The Boss” is one of my favorites, one of the highlights from the first disc. She even sings to Elvis, “You are the king.” Of course, she also sings to him, “You’re the boss.” Hey, Springsteen, what’s up with that? “The Lady Loves Me” is a fun duet; it contains a reference to Romeo And Juliet, but is more like The Taming Of The Shrew in its content and style.

The second disc opens with “Man’s Favorite Sport,” a kind of silly and playful song about men pursuing women. It’s followed by “I’m Nobody’s Baby,” the collection’s previously unreleased track. As I mentioned earlier, this is one of the highlights of the second disc. It features Al Hirt on trumpet. Ann-Margret and Al Hirt put out an album together titled Beauty And The Beard, but for some reason this song was not included. It’s a treat to hear it now. Another song from their sessions, “Mack The Knife,” didn’t make it onto the album either, but was released on a five-disc collection in 1998. Two tracks that did make it on the album – “Bill Bailey” and “My Baby Just Cares For Me” – are included on The Definitive Collection. I absolutely love their rendition of “Bill Bailey,” done as a duet, the opening section reminding me of “Baby, It’s Cold Outside” (a song which interestingly was also included on Beauty And The Beard). I love the way the seductive Ann-Margret delivers the line, “I know, I know I done you wrong.” She has offered to pay the rent, and is told “Well, you don’t have to do that.” So the first “I know” can be taken as response to that, like she had no intention of paying the rent, and Ann-Margret’s reading is part savvy, part innocence, and completely wonderful. Then “My Baby Just Cares For Me” is a whole lot of fun. These tracks with Al Hirt are among the collection’s best.

Ann-Margret’s rendition of “Love Makes The World Go Round” is sweet. That’s followed by “Our Language Of Love.” Both tracks were included on David Merrick Presents Hits From His Broadway Hits. Most of the music on the second disc is from movies, including several songs from the soundtrack to The Pleasure Seekers, all of which were written by Jimmy Van Heusen and Sammy Cahn (the best of which is “Next Time”). Ann-Margret also delivers a cool version of “Mister Kiss Kiss Bang Bang,” a song written by John Barry and Leslie Bricusse for the James Bond movie Thunderball. The final three tracks are from The Swinger and originally included on the album Songs From The Swinger And Other Swingin’ Songs.

Disc One
Disc Two
The Definitive Collection was released on March 3, 2017 through Real Gone Music.
Posted by Michael Doherty at 3:04 PM