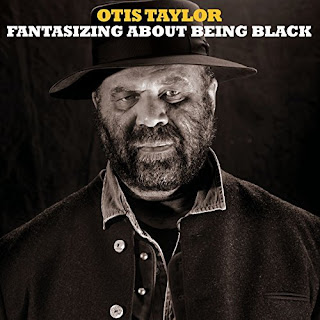 The songs of Otis Taylor’s new album, Fantasizing About Being Black, touch on themes of freedom and slavery, civil rights and personal relations, and remind us that sometimes the bigger picture is contained within the smaller, individual story, rather than the other way around. All the songs on this release are originals, written by Otis Taylor, though different renditions of some of them were included on earlier albums. Joining Otis Taylor are Todd Edmunds on bass and Larry Thompson on drums. Guest musicians, including Jerry Douglas and Ron Miles, also join him on various tracks.

The album opens with “Twelve String Mile,” a song that was previously included on his When Negroes Walked The Earth album (on that release it was titled “12 String Mile”). The lines that stood out for me the first time I listened to this disc are, “I’m alive/Be dead soon.” This version has quite a different feel from the earlier rendition. And man, I totally dig that horn, the way it comes in so casually, hanging about like another character, another voice, sometimes quiet, sometimes with plenty to say, and over this cool laid-back yet insistent groove. That’s Ron Miles on cornet. Jerry Douglas also joins Otis Taylor on this track, playing koa wood lap guitar. Otis Taylor follows that with “Walk On Water,” which had also been previously included on another album, Truth Is Not Fiction. And like the first track, this version is markedly different from its earlier form. I strongly prefer this new rendition, which opens with acoustic guitar, sounding like a western about to explode, like a lone man traveling to meet his fate. The song kicks in to become something else entirely. These songs seem to have deceptively simple lyrics; the words, repeated, take on another meaning, another life, like some kind of chant or prayer. Ron Miles again joins Otis on cornet.

“Banjo Bam Bam” works the same way, with the repetition of certain phrases acting almost like a mantra, like trying to maintain a hold on reality by repeating what he knows, what’s happening to him. Again, an impending, uncertain death is in the air, but this song has folk elements. Otis Taylor plays banjo on this track, and Anne Harris joins on violin. And then the song surprisingly ends with a kind of fun bit of play. That’s followed by “Hands On Your Stomach,” which has a heavier blues-rock groove, something that could get out of hand, but is held in check by Otis, kept back behind his vocals – a storm contained, held back by a prayer. This song was previously included on Otis Taylor’s Respect The Dead.

Things get lighter, more playful with “Jump Jelly Belly,” with the horn returning, dancing and singing, sometimes with a puckish vibe, while Otis’ vocals at times are almost like a rhythm or percussion instrument, along with that steady, relentless groove. The song’s title, though referring to a specific soldier in World War II, reminds me of a book from my childhood. (Does anyone else remember reading Jelly Belly?) This song was also originally included on Respect The Dead. That’s followed by “Tripping On This,” which opens with a traditional, familiar blues groove. Yeah, this is a blues album, but at this point I wasn’t expecting to hear that regular blues thing. But Otis Taylor turns it, making it almost a meditation on the theme (and with electric banjo), and I become nearly mesmerized by it, by the song. And so the sudden ending is jarring, like an unexpected (and perhaps unwanted) release.

The CD concludes with “Jump To Mexico,” one of my favorite tracks due in part to a moving vocal performance by Otis Taylor. And as with the album’s opening track, Jerry Douglass plays koa wood lap guitar on this song. “Jumped out a second story window/But I could not break my fall.”

CD Track List
Fantasizing About Being Black was released on February 17, 2017.
Posted by Michael Doherty at 1:31 AM