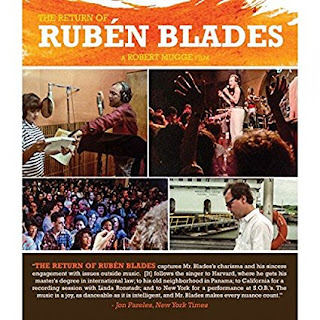 Though I listened to some of Rubén Blades’ music when I was studying Spanish in high school and college, and enjoyed what I heard, I never really immersed myself in it. I’ve never seen him in concert and, for one reason or another, don’t own any of his albums. So the release of The Return Of Rubén Blades on Blu-ray provided me with an opportunity to learn something about this famous singer, songwriter and musician. The Return Of Rubén Blades was originally released in 1985, when Rubén was in his thirties and before he’d embarked on an acting career (though in this documentary he mentions his interest in pursuing film work). There is plenty of music, of course, and through interviews we also get a good sense of Rubén Blades’ passions and frame of mind at that time.

The documentary opens with a graduation ceremony at Harvard University, where Rubén Blades was receiving his master’s degree. He talks about his plans to return to music, which of course surprises some of the folks at the university. The film contains concert footage of Rubén Blades performing at a club, but also gives him a chance to introduce each song through the interview segments. For example, he talks about “Todos Vuelven,” a song written by Cesar Miro, and how it’s about everyone returning to the place of his or her birth. And then we’re treated to the live performance of the song. I appreciate that we get the full song. Robert Mugge, who directed this film, is really good about that in his music documentaries (he also directed Black Wax, The Kingdom Of Zydeco, and Zydeco Crossroads: A Tale Of Two Cities, among others).

Rubén then takes us back to Panama and the place of his childhood. He says that things have changed a lot. “I’m not that old,” he jokingly points out; then adds, “I’m reasonably old.” He really gets a chance in this film to bring his world to us in a personal way. He introduces us to his father, and then there’s a cute moment where his father speaks to us, while in the background Rubén is signing autographs for children (well, not just children). Interestingly, he went to school to study law and worked as an attorney before going to New York in the 1970s to pursue music.

He tells us how he sees his material fitting into the larger history of Latin music, mentioning that Latin music is passionate. It’s interesting that the songs chosen for this film in 1985 are completely relevant today. For example, in “Buscando America,” he sings, “Estoy buscando América y temo no encontrarla/Sus huellas se han perdido entre la oscuridad/Estoy llamando América pero no me responde/Te han desaparecido los que temen la verdad.” These days when I look for America, I too am afraid I won’t find it. And America isn’t answering my call. In the interview, he talks about how the United States is presented as a symbol, and that people come here because of what the country is supposed to represent, what it’s supposed to be. “People like myself are disappointed at finding that a lot of things that are offered are not true,” he says, likening the country to a Hollywood exterior set which looks great on the outside, but inside is empty. These days, I’m afraid it doesn’t even look good on the outside.

His music is fun to dance to, but it is certainly not lacking in substance. The message of this music is needed today as much as it was when this documentary was made. When introducing “Muevete,” he urges the audience, “End racism.” Our country has taken several steps backward in that regard with its current administration. By the way, at one point in this film, Rubén Blades talks about the possibility of running for political office in Panama. Again, this was in 1985. Nearly a decade later he did run for president of that country. He didn’t win, but he did receive a significant number of votes. And recently he’s talked about possibly running again in 2019.

This documentary also features footage of Rubén Blades in the recording studio with Linda Ronstadt. She is interviewed for the film, mentioning how she loves to sing in Spanish. I love that we get a good deal of footage from this recording session, rather than just a brief snippet. And now I feel a need to go out and purchase some of Rubén Blades’ albums.

The Return Of Rubén Blades was directed by Robert Mugge, and was released on Blu-ray on July 22, 2016 through MVD Visual. The disc contains no special features.
Posted by Michael Doherty at 3:38 PM