The Kingdom Of Zydeco Blu-Ray Review 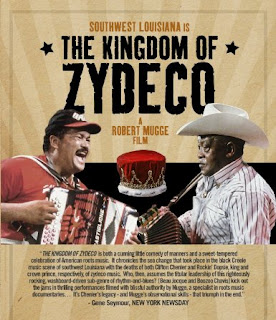 The Kingdom Of Zydeco is a documentary film about the zydeco music of southwest Louisiana. If you’re not all that knowledgeable about zydeco, don’t worry, this film begins with a few title cards, the first one explaining, “Zydeco is the dance music of the Creole people of south Louisiana, a hybrid of traditional French music and Afro-Caribbean rhythms.” The film centers on two musicians working within that realm: Boozoo Chavis, who made the first commercial zydeco recording in 1954, and Beau Jocque, a newer and popular artist at the time.

This movie was released theatrically in 1994, and most of it covers the fall of 1993, when a special concert was held to determine which of those two musicians would be named the new “King of Zydeco.” Both Boozoo Chavis (whose real name is Wilson Anthony Chavis) and Beau Jocque (whose name is Andrus Espre) are interviewed. And it’s interesting hearing the two musicians talk about each other and about the competition, almost like two boxers who are getting ready to step into the ring. It’s kind of strange, this sense of competition, as is the bragging. At times it seems rather serious, though at other times they seem to imply that it’s all for the fans’ enjoyment.

There is plenty of footage of the two bands performing, and this footage is included throughout the documentary. I’m particularly fond of the bass player for Boozoo Chavis (though it looks like that scarf tied to the end of his bass would get in his way). Beau Jocque’s band is all dressed in something resembling softball league uniforms – red T-shirts and caps with the band name Hi-Rollers in white letters. Both bands are really good, though Beau’s seems to be more of a party band. Listen to “Give Him Cornbread,” for example. That song becomes a really good jam in the concert footage.

In addition to Boozoo and Beau, several other musicians are interviewed, such as John Delafose, Nathan Williams and Mark Anthony Williams. And there are interviews with others involved in the zydeco business, including a record shop owner who says that Beau Jocque is the most popular artist. “He’s the one who’s selling the most right now,” she tells us. The crowning of the king of zydeco is a surprisingly formal thing, as one woman with the Louisiana Hall of Fame describes the process, which involved paperwork and so on.

The film has a nice, relaxed tone, and gives you a strong sense of the place as well as the music, and how the two are tied together. I love that the film presents the complete songs, rather than just snippets. And the music itself is really good. However, for me, the choice for king is an easy one. It’s Boozoo all the way. By the way, toward the end a title card reads, “April 1974.” It should of course read “April 1994,” as it shows the crowning of the king of zydeco, and it’s amazing to me that an error like that would not be caught in time.

The Blu-ray disc includes Iguanas In The House, a short film by Robert Mugge documenting The Iguanas in the process of recording some new material. It is approximately twenty-six minutes, and features interviews with band members. The special features also include The Origins Of The Kingdom Of Zydeco, an interview with Robert Mugge about how the documentary came about, and about the venue where the concert took place. He also mentions all of the key figures of the film who have since died, including both Boozoo Chavis and Beau Jocque. The Origins Of The Kingdom Of Zydeco is approximately ten minutes. And there is a short interview with Michael Tisserand, who wrote a book about zydeco.

The Kingdom Of Zydeco was directed by Robert Mugge, who also directed Black Wax and Pride And Joy: The Story Of Alligator Records. He would return to zydeco for the 2015 film Zydeco Crossroads: A Tale Of Two Cities, which was also recently released on Blu-ray. The Kingdom Of Zydeco was released on Blu-ray on April 8, 2016 through MVD Visual.
Posted by Michael Doherty at 5:31 PM