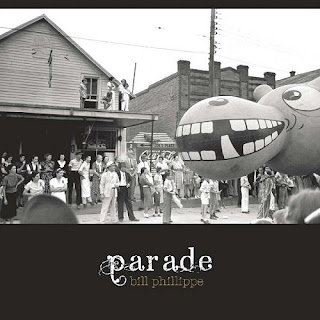 Bill Phillippe is a singer, guitarist and songwriter based in San Francisco. Inspired by his love of delta blues, he released his first solo album, Ghosts, a year and a half ago. That album contains some classic blues tunes like “Come On In My Kitchen” and “Death Letter,” as well as some original compositions. He has now followed that up with a new CD, Parade, which features almost entirely original material. This is bluesy folk, with some jazzy elements as well, giving it a very cool, laid-back sound and vibe, like a late night or early morning in New Orleans, when most people have gone to bed or passed out, but there are still things to be said, things to be felt and expressed for those strange denizens of pre-dawn dealings, that half-light of farewells and possibilities. And it’s not just jazzy because of the presence of the clarinet, but its willingness – or eagerness – to play a bit with form (like on “Everything I Have Is Grey”), sometimes going in unexpected directions. Ah, who knows just what the day will bring? And before that, the question is, “If I should lose my mind tonight, would you love me anyway?”

Parade opens with “Blues Come Callin’ (Home),” a seriously cool tune with the bass having a strong presence. The clarinet acts like a voice perhaps doing the calling. I’m certainly ready to answer its call, as it sounds inviting, rising up from the streets like a possible angel among derelicts. Bill Phillippe’s vocal approach is like one singing almost to himself, not needing to belt out the lyrics, but knowing his voice will reach those it needs to, those it can reach within this environment. And he finds support by some nice touches on accordion.

That’s followed by “Proper Street,” which contains a reference to Duke Ellington’s “Prelude To A Kiss” in the lines “I need you always exactly like this/I play the prelude to a kiss.” Duke Ellington is one of only two songwriters that Bill Phillippe turns to for covers on this CD. He does a version of Ellington’s “Solitude,” combining it with a song of his own titled “A Kinder Voice.” He performs “Solitude” as a guitar piece, without the lyrics by Eddie DeLange and Irving Mills.

A song that grabs me each time I listen to this disc is “14th Street,” with its line “Please find me” reminding me of the Leonard Cohen poem that goes “Marita/Please find me/I am almost 30.”  And I love the clarinet here. Both it and the accordion provide a kind of uplifting feel which we need. And check out that bass line. “As you wave goodbye/Memories refuse, refuse to fade/My penance, this solitary space.” Another favorite of mine is “Parade,” the CD’s title track. It has such a wonderful vibe. I particularly like the way the bass and accordion work together. “We danced round and round/And the circus band played.” I also really love “Red Beret,” which has a playful and cool tone and attitude. Ah, every girl, a song.

Perhaps Tom Waits will cross your mind once or twice while listening to Bill Phillippe. Clearly, Bill embraces this, as he actually ends the album with a cover of Tom Waits’ “Take It With Me,” a song from the Mule Variations album. Bill makes it a slow kind of waltz, with the clarinet taking a lead spot at the beginning before the vocals come in. It’s a really good rendition.

CD Track List
The musicians on this release are Bill Phillippe on vocals and guitar, Ivor Holloway on clarinet, Swen Hendrickson on bass and Glenn Hartman on accordion.

Parade was released on May 17, 2016 on Arkansas Street Records.
Posted by Michael Doherty at 11:20 PM