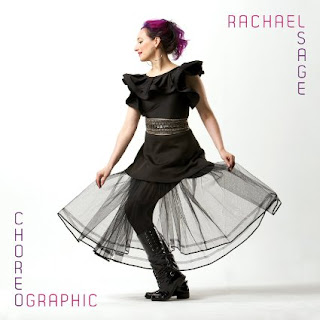 On Rachael Sage’s new release, Choreographic, she delivers a sound that mixes pop and folk really well. She is backed by a band that features prominently both cello and violin, instruments I love, creating an emotionally moving and satisfying group of songs, nearly all of which she wrote. In addition to writing and providing lead vocals, Rachael Sage plays piano, guitar, Wurlitzer and Mellotron on this album. Her band, The Sequins, is made up of Ward Williams on cello, Kelly Halloran on violin and backing vocals, and Andy Mac on drums and backing vocals. Joining them on this disc are some excellent musicians, including Doug Yowell on drums, Russ Johnson on trumpet and Dave Eggar on cello, all of whom have played on some of Rachael’s earlier releases. Peter Himmelman also joins Rachael on one track.

Choreographic opens with a beautiful, bright pop song with an unusual title, “Heaven (Is A Grocery Clerk).”  “Give me something to dance about,” she sings in this song. In the liner notes she mentions that this CD is a “love-letter to dance, to dancers everywhere, and to the cast of Solid Gold, the only show I was allowed to watch on a school night, growing up.” (Wow, mentioning that show really takes me back!) This is an excellent song, and is one of three tracks that I heard earlier, tracks that got me excited for this release. One of the others is the following track, “Loreena,” on which Rachael delivers a sweet vocal performance, of both innocence and love. “But I’m not scared of being someone who reminds you of/Who you were when you followed your bliss.” The strings are so beautiful; this music will lift you up.

Then “Try Try Try,” the other song from this CD to be released earlier, opens with more of a rock feel. There is a really good energy to this tune, but it is the violin part that I love most about this song. This is actually the first song I heard from this release, more than a month ago. Here is a taste of the lyrics: “He wrapped his arms around me like a blanket/He spun a web around me like a spell/He flung an anchor through my ship and sank it/I never knew that I could drown so well.”

This CD includes another excellent song titled “Home,” though this one also has a parenthetical title, “(Where I Am Now).” I know I’ve said this before, but I really need to make a mix CD of songs titled “Home.” There are so many good ones. Check out these lines: “Home is where you’re taken in/Fearlessly breathing with the wind/Home is where you set your spirit down/I’m at home in all this beauty, everything about it moves me/I may be from another place but home’s where I am now.” This disc features a second version of this song at the end, and I actually think that version might be even better. “Home” was written by Rachael Sage and Fiona Harte.

I really like the jazzy elements to “French Doors,” particularly that wonderful lead on trumpet toward the end. And Rachael’s vocal delivery has something of a delightful vulnerability. And the opening lines of “I’ve Been Waiting” are great: “I’ve been waiting my whole life for someone who is/Nothing anything like you at all my love.” That song also has a good groove, a vibe you can totally sink into.

“Learn To Let You Go” is the album’s only cover song. It was written by JP Hoe, and included on his 2012 release, Mannequin. It’s a really good song, and Rachael does a wonderful job with it. It’s followed by “Five Alarms,” a gorgeous song that draws me in every time I listen to this disc. There is something sexy and oddly haunting about its sound, with that great percussion and the wonderful work on strings and Rachael’s excellent vocals. Lyrically, it’s not the disc’s strongest song, with the line “A watched pot will never boil,” and yet it’s one of my favorites. “Now you’re here in my arms and we’re on fire/Five alarms.”

And then “7 Angels” is one of the most moving tracks on this CD, and this one features some excellent lyrics. Check out these powerful lines, which begin the song: “In a sea of all the faces that I have ever seen/In a crowd of all the strangers whose shoulders I have touched/In an ocean of unfathomable loss and need/I see seven small coffins and it’s just too much.” Peter Himmelman joins Rachael Sage on this track. That’s followed by the beautiful “It Would Be Enough.”

CD Track List
Choreographic is scheduled to be released on May 20, 2016 through MPress Records.
Posted by Michael Doherty at 9:59 PM