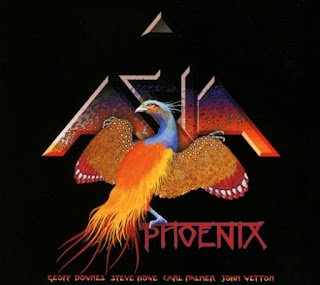 The first release by Asia, a self-titled record, was something of a monster of an album. It had several hits, including “Heat Of The Moment,” “Only Time Will Tell” and “Sole Survivor.” It came out in 1982, when I was ten, and I listened to that record over and over that year. That was also the year I was turned on to Dungeons & Dragons, and perhaps partly for that reason, I fell in love with the album’s cover, which depicts a giant sea dragon looking into a floating orb. Very cool. I remember being excited to hear what this group would do next, but then ended up being not nearly as taken with Alpha, the band’s 1983 release. And after that, I kind of lost track of the band as it began to go through its many changes. Steve Howe was the first to leave. And after the next release, Astra, John Wetton left. After a while, Geoff Downes was the only original member remaining. It wasn’t until 2008, with the release of Phoenix, that all four original members put out a studio album together. And, if I recall correctly, there was a short time there when there were two bands called Asia touring simultaneously (the second being the band that Downes left to join the reunion, a band led by John Payne). Anyway, there were two versions of Phoenix released, one in Europe and one in the United States. And now both have made available in one two-disc set, which also includes a couple of bonus tracks.

The album’s first track, “Never Again,” opens with guitar, reminding me a bit of the way the band opened its debut album. Not that this song sounds like “Heat Of The Moment,” though there is certainly something of a 1980s feel to it. “Never again will I bear arms against my brother/Never against will I dishonour anyone/Never again will I wish evil on another/Never again will I spill blood of any mother’s son.” “Never Again” was written by John Wetton and Geoff Downes. It’s followed by “Nothing’s Forever,” which actually begins with a bit of acapella singing. This one was written by John Wetton, and to my ears is a stronger track. Check out the chorus: “You know that nothing’s forever/It’s just for today/Can’t live for the future, forget yesterday/And hold onto life, for in moments it can fade away.”  But those Latin-flavored touches on guitar are what really make this song special.

“Heroine” is kind of cheesy, with lines like “I always saw you as an eagle high in the sky/So tell me why/Only you hold the key to set me free.” It’s followed by “Sleeping Giant/No Way Back/Reprise,” which begins as a strange and engaging mood piece, like a religious sect on top of a mountain calling or responding to a sunrise. Or perhaps to an alien landing, as a few minutes in, the song takes a sudden turn, with a strong pulse. “No way back, no way back, no way back.” There is a bit of mixing one’s clichés near the end: “We stand on the ledge, this time it’s sink or swim/We’re spreading our wings and we’re learning to fly.” Wait, are we swimming or flying? I guess it doesn’t matter. The song then returns to an interesting instrumental at the end.

“Alibis” has a 1980s sound and vibe. This is the one track on this album to be written by all four band members. I particularly like the instrumental section toward the end, with a surprising combination of sounds and moods. “I Will Remember You” is a love song of sort, the woman in question being gone but certainly not forgotten. Is it sweet, or is it an obsession? “The only face I see/I can’t forget/In dreams you come to me/I’m never free.” Hugh McDowell joins the band on cello on this tune. The first disc contains, as a bonus track, as acoustic remix of this song. I actually prefer this bonus version.

“Parallel Worlds/Vortex/Déyà” is the second track on this CD to be made up of three songs. The first part has this great instrumental moment when the guitar licks have a sort of bluesy feel. The track then becomes kind of a wonderful instrumental, a tune that pulls you along into its own world, opening up gloriously. This actually might be my favorite section of the album. It features some great work on drums by Carl Palmer. And then it relaxes greatly, and becomes really pretty. I absolutely love that guitar. This track is one of Asia’s best.

“Orchard Of Mines” is the only cover on this album, written by Jeffrey Fayman and Daniel Pursey, and originally recorded by Globus. “Over And Over” has a positive and uplifting feel. It was written by Steve Howe (and is one of only two tracks on this CD to be written by Howe, the other being “Wish I’d Known All Along”). The album then concludes with another positive song, “An Extraordinary Life,” a bright song urging us to “Enjoy today” and reminding us that “This is an extraordinary life.” I love the vocals on the chorus; they have a simultaneously rousing and comforting quality, if that’s possible. And Hugh McDowell joins the band again on cello. “An Extraordinary Life” was written by John Wetton and Geoff Downes. The first disc includes an acoustic remix, and as with “I Will Remember You,” I do prefer this version.

The second disc contains the American version of the album, which features a different mix of “Never Again” and different mastering. There are no bonus tracks on the second disc.