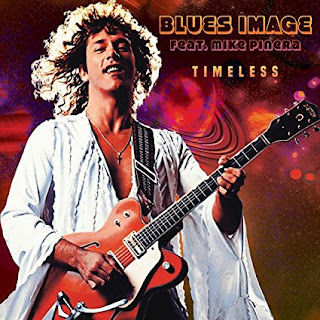 “Ride Captain Ride” was a big hit for Blues Image in 1970, reaching #4 on the chart. And now the captain is riding again. I had no idea that Mike Pinera had kept Blues Image going. He actually left the band during its initial run to join Iron Butterfly. And then after that band broke up, he embarked on a solo career. The new Blues Image album, Timeless, features new recordings of some classic material from Iron Butterfly as well as songs from Pinera’s solo career. The band is Mike Pinera on guitar and vocals, Tim Franklin on bass and vocals, Eddie Metz Jr. on drums, and Michael Franklin on keys. Joining them are Brian Snapp on saxophone; Charlie Bertini on trumpet; Brian Scanlon on trumpet; Jerry Kalber on oboe, flute and clarinet; Pat Travers on guitar; Jonathan Cain on keyboard; Charlie DeChant on flute and tenor saxophone; Tommy Calton on guitar; and Steady Joseph on percussion. Most of the tracks on this album were written by Mike Pinera.

The CD opens with a really good rendition of “Ride Captain Ride,” feeling both fresh and true to the original. It features a much longer introduction than did the original, this time with strings. That introduction is pretty at times, and I like the way the introduction adds to the great build of the song. This rendition is nearly eight minutes, and features a good guitar section in the middle. That’s followed by “In-A-Gadda-Da-Vida” (here titled “In A Gadda Da Vida”), which might seem like a strange song to revisit, but it was on for all of ten seconds before I got totally into it. And as you’d expect, it becomes a good jam, with a nice lead on electric guitar. This version is long, but not nearly as long as the original (it’s just under ten minutes, compared to the seventeen minutes of the original version). As with the original, there is a drum solo. It’s not as long in this version, but it leads to a fantastic section with drums and horns, which is one of my favorite parts of the song. Seriously, the horns are a big part of this version’s success, and are largely responsible for my belief that this version is actually much better than the original. Yes. One other note: it is interesting that Mike Pinera chooses to cover this particular Iron Butterfly song, as it was released before he joined that band. It was written by Doug Ingle.

In 1996, Mike Pinera released an album titled In The Garden Of Eden. The lead-off track on that album was “Fantasy Of Love,” and it’s included here as well. It’s a mellower, sweet song in the pop realm, with a Latin vibe and a bluesy feel to the guitar. Some of it is sung in Spanish. “Fantasy Of Love” was written by Mike Pinera and Duane Hitchings. It sounds like the same version as that on In The Garden Of Eden. From that same album are “Come Back” and “Touch My Heart.” (“Touch My Heart” is certainly a bit on the cheesy side.)

“Love Is The Answer” is an energetic tune featuring some really good percussion and great work on horns. This song was the opening track from Blues Image album Open (the same record that included “Ride Captain Ride”). Jonathan Cain (from Journey) plays keys on this track. Pat Travers joins the band on the new version of “Pay My Dues,” a bluesy hard rock number that was also originally included on Open. Michael Franklin provides some great stuff on keys. Pat Travers also plays guitar on “Butterfly Bleu,” a song from Iron Butterfly’s Metamorphosis. As done by Iron Butterfly, this was another long one (approximately fourteen minutes). This new rendition is only eight minutes. Bursts at the beginning give way to a solid blues base. This one too becomes a good jam, and features a cool section with bass.

I remember when I was a kid hearing the story that “In A Gadda Da Vida” was really titled “In The Garden Of Eden,” but the band was so trashed when they announced the title that the words were slurred and the gibberish title stuck. Well, perhaps playing on that song, here Blues Image includes a song titled “In The Garden Of Eden,” the title track from that Mike Pinera solo album, a song with an environmental message. “And what we need on Earth is some love and understanding/That’s what the world is demanding/From me and you.”  That’s followed by “Leaving My Troubles Behind,” a song that was originally included on Blues Image’s self-titled debut record. This has some glorious heavy 1970s rock vibes, but with horns, making the tune even better. This is the kind of thing I listened to often in my childhood, with some good jamming and even a brief a cappella vocal jam. This is one of my favorite tracks.

“Isla” was the title track of a Mike Pinera solo record from 1977. This new version has something of a different feel, apparent from the beginning, with the added introduction. But it still has that blues rock power. The album then concludes with “Something To Say,” another energetic fun rock number. This song was originally included on Blues Image’s debut record, where it was titled “(Do You Have) Somethin’ To Say.” This new version features some really nice work on keys by Jonathan Cain.