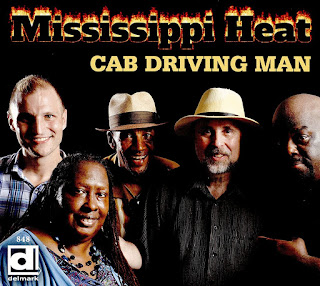 At a time when nearly the entire nation has a bad case of the blues, Chicago blues band Mississippi Heat offers some fun, uplifting tunes on the newest release, Cab Driving Man. Yes, it’s a case of using the blues to combat the blues, and I think it might be working. It’s working for me at least. Mississippi Heat is led by harmonica player Pierre Lacocque, who wrote most of the tunes on Cab Driving Man. The album features two lead vocalists. Inetta Visor sings lead on most tracks, with Michael Dotson singing lead on the tracks that he wrote. This band has been performing for more than twenty-five years, with different lineups. The lineup, as of the release of this CD, is Pierre Lacocque on harmonica, Inette Visor on vocals and tambourine, Michael Dotson on guitar and vocals, Giles Corey on guitar, Brian Quinn on bass, Terrence Williams on drums, and Chris “Hambone” Cameron on piano and organ. Joining them on various tracks are Ricky Nelson on bass, Kenny Smith on drums, Sumito Ariyo on piano, Dave Specter on guitar, Ruben Alvarez on percussion, and Sax Gordon on saxophone.

The band gets things going with “Cupid Bound,” a good tune to get you on your feet, with some great work on harmonica. “I never really planned/To ever want to settle down/No, I never dreamed, baby/To be one day Cupid-bound/So why do you care?/Why do you love me the way you do?” Sax Gordon plays sax on this track, and his playing helps give this song something of a classic feel. Sax Gordon also joins the band on the CD’s title track, “Cab Driving Man,” one of my favorites. I love the groove to this song, with Ruben Alvarez adding some delicious percussion, and the song has a something of a gypsy funk vibe. And in the middle of it all, there is a surprising and wonderful lead part on piano by Chris “Hambone” Cameron that is certain to wipe away at least some of your blues. “He knows your city well/He don’t need no fancy map/You can relax, let go/No need to sweat/You’ll get there in a snap.”

Both of those songs were written by Pierre Lacocque. They’re followed by one of Michael Dotson’s songs, “That Late Night Stuff,” fun Friday night party blues rock, with great touches on saxophone by Sax Gordon. As I mentioned earlier, Michael Dotson sings lead on this one. He also sings lead on “The Last Go Round” and “Can’t Get Me No Traction.” “The Last Go Round” kicks in with a strong groove. It’s about the end of a relationship, the lines that stuck out for me the first time around being “And I’m sorry, baby, so sorry for you/You can’t get it right no matter what you do.” We’ve all wanted to sing that to someone at some point, right?

“Flowers On My Tombstone” has an excellent, timeless blues sound, and is one of this disc’s highlights. It tackles a brutal subject, an abusive marriage, the woman staying because of the kids. She sings the song directly to her husband, a man who himself was beaten as a child. And Inetta Visor delivers a great vocal performance here. “It would be a miracle when I die/If you laid flowers on my tombstone/It’d be like watching blood dripping/Right off an old dried-up bone.” Wow. That’s followed by “Icy Blue,” a somewhat funky blues tune, interesting in the way it handles its subject. It asks an important question – what if following your dreams would put your relationship at risk? It shouldn’t, of course, but the woman in this relationship isn’t certain whether her man will stand by her the way she stood by him while he reached for his goals. “Would you leave me/If I followed through/Or would you still be mine/Or will you turn icy blue?/I don’t want to lose you/This ain’t about a man/It’s a chance I can’t miss/I hope you understand.” Yes, the songwriting is certainly one of this band’s strengths, tackling some serious subjects. This song contains a cool rockin’ jam, led by harmonica and then by guitar.

Another of my favorites is “Life Is Too Short.” It features a nice, light, jazzy groove, with delightful touches on harmonica (and a great lead on harmonica partway through). Inetta Visor delivers a wonderful vocal performance that begins smoothly and gently, as she tells us, “I’ve got a mind to travel/Explore this great wide world,” and then gains in power. Oh yes, I want to explore too. Seems like a good time to get the hell out of the United States, right? “Life is so short that I’m itching to go.” Kenny Smith plays drums on this one. This is a seriously good song. Then “Rosalie” is all about the groove, and features a cool bass lead, plus percussion by Ruben Alvarez. “Mama Kaila” is one of those great, relaxed blues numbers, with some wonderful work on harmonica right from the start. This one features another outstanding vocal performance by Inetta Visor. “Yes, please call Mama Kaila/Tell her we’re not going out today/You know, she’s got her claws deep inside me/And I am tired of being her sweet prey.” This track also features a really good lead guitar section by Michael Dotson. “Lonely Eyes” is a fun track. The “I have such a weak spot when I see a man in need” line made me laugh out loud the first time I listened to this album.

The album contains two covers. The first is “Don’t Mess Up A Good Thing,” written by Oliver Sain. Giles Corey joins Inetta Visor on vocals for this one. The second is a fun rendition of “Smooth Operator,” written by Clyde Otis and Murray Stein. I still prefer Sarah Vaughan’s recording of this one, but Mississippi Heat does a really good job with it, definitely getting into the spirit of the song.  The CD concludes with a joyful instrumental number titled “Hey Pipo!”