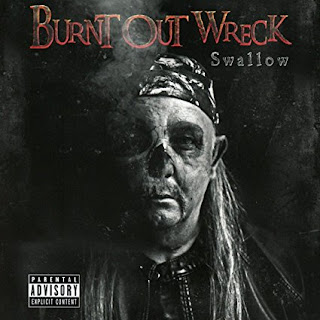 As you might have noticed, I don’t review a lot of hard rock albums on this blog. That’s because, well, I don’t like a lot of it. And, to be honest, I didn’t expect much when I put on Swallow, the debut album from Burnt Out Wreck. But by the second track I was getting interested, and by the fourth track I had to admit that I was totally digging it. First of all, it reminds me of early AC/DC (High Voltage was one of the first albums I ever got, when I was six or seven years old), in the vocals, and in the use of blues influences to straightforward hard rock. But also what got me was the sense of play, the sense of humor. Like I said, it was the album’s fourth track, “Pullin’ It Out,” that really won me over. And it’s kind of a silly song. “She said she loves me/She said she loves me not/She said needs me/She said, you’re all I’ve got.” This is not a case of rock taking itself too seriously, but rather reminds me of those great fun hard rock songs I grew up on. Not that the subject matter of this music is all fluff; no, some serious subjects are addressed.

Burnt Out Wreck is the project of Gary Moat, whom you might recall from the 1980s hard rock band Heavy Pettin’. On this new release, Gary plays not only drums, but guitar and bass, as well as providing the lead vocals. He is joined by Adrian Dunn on lead guitar and backing vocals, and on certain tracks by Michael Ivory on drums, Jon Topley on drums, Rob Shaw on bass, Calum Moat on backing vocals and Maxwell Moat on backing vocals. All of the songs are originals, written by Gary Moat. Gary also co-produced the album (with Steve Rispin).

The CD opens with “Burnt Out Wreck,” adding this band to the list of bands that have a song whose title is the name of the band, putting them in the ranks with Bad Company, Bullied By Strings, They Might Be Giants, Black Sabbath and Night Ranger (among others). The song looks back while also taking stock of the present, dealing with passion for music. “And we knew in our hearts/That we would live forever/Protected by our songs.” That’s followed by the album’s title track, “Swallow.” The first time I listened to this CD, this was the song that got me interested. It definitely reminds me of AC/DC, and that’s certainly not a bad thing. It has a delicious raw power and an attitude that I appreciate, and that I think a lot of us can appreciate these days. “This is why the country’s divided/Feeling something has got to give.” Oh yes. And check out the chorus: “Don’t ask me to go down/On my bent knees for you/Don’t ask me to swallow/The shit that I hear from you.” This is a damn good song, one of my favorites from this album, a song I’d love to blast outside the homes of certain politicians.

Then “She’s The One” comes on strong, with a hard-hitting and catchy guitar riff. I really like this tune’s groove, which might get you dancing. Music like this gets me excited about hard rock again. And it’s followed by “Pullin’ It Out,” the song that made me really dig this CD. Sure, it’s a bit juvenile, but it’s a whole lot of fun. The first line is “Pulling it out and sticking it in.”  And then the chorus features some fun backing vocals. “Pulling it out/She’s always pulling it out/Sticking it in/I’m only sticking it in.” But the line that follows the chorus – “Oh, silly me” – is what made me laugh out loud the first time I listened to this disc. There is a great sense of play here, but the music is delivered earnestly. There is no holding back with that guitar line or with the vocals.

“Medusa” is another song with a good, solid rock groove. This song sounds like summer to me, with its fun rock riffs and beat, and its lyrics about a dangerous woman. “When she walks through the room/You don’t dare take a look.” Those with even the slightest knowledge of mythology will know just exactly why. And then in “She’s A Dirty Love,” Gary Moat sings, “Jumping on the bed/She’s got all the moves/Boy, she really knew how to tease me/She’s a dirty love/Yes, she’s is.” “Rocking Man” is another strong rock song, this one about economic troubles. “Hocking my guitar just to pay the rent/No way now, baby/Went and got loaded, all the money is spent/But the landlord came, tried to throw me out.”