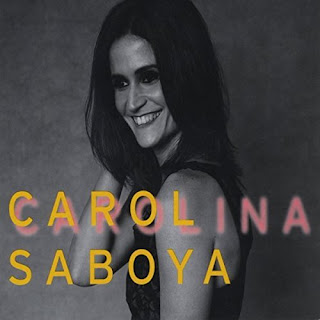 These days I’m constantly on the lookout for music to raise my spirits. I don’t think I’m alone in that search, that need, what with the anxiety many of us feel due to the political situation here in the U.S. Things are basically fucked out there, and I keep hearing it will end soon, that Trump will be impeached, that he’ll be jailed, that…. Well, so far these promises of a better future haven’t paid off. So I turn to music. Over and over, I turn to music. Today I popped in Carol Saboya’s most recent release, Carolina, and immediately felt lighter. Something about her voice tells me not to worry, that things will be all right. Hers is a beautiful voice, to be sure, but it’s also a friendly voice, a comforting voice, so the music feels close to us. You know?

Carolina follows the 2015 release Copa Village by Carol Saboya, Antonio Adolfo and Hendrik Meurkens. On that album, they covered several songs by Antonio Carlos Jobim, and Carol Saboya likewise does a few Jobim compositions on the newer CD. She also dips into some pop with songs by The Beatles and Sting. Joining her on this album are Antonio Adolfo on piano (he also did the arrangements), Marcelo Martins on flute and saxophone, Leo Amuedo on guitar, Jorge Helder on bass, Rafael Barata on drums and percussion, and André Siqueira on percussion (André Siqueira also played percussion on Copa Village).

Carol Saboya opens the album with one of the Antonio Carlos Jobim compositions, “Passarim.” It begins interestingly with flute, piano and percussion before Carol’s vocals come in. Her voice is both warm and pretty. And later there is a really nice instrumental section featuring good work on guitar and flute. But it is the following song, “1 X 0,” that really got me interested. It is totally delightful, and Carol Saboya does some wonderful stuff with her voice on this one. Seriously, this track commanded my attention, and the longer it went on, the bigger my smile grew, each new section better than the previous one. It’s fun and adorable, a treat for my ears. Carol Saboya follows that with a pretty song, “Senhoras Do Amazonas.” And then I love the flute on “Avião,” one of two songs on this album written by Djavan Caetano Viana.

As I mentioned she covers a couple of pop songs, including a mellow, pretty version of The Beatles’ “Hello, Goodbye.” It has a relaxed groove, but there is still an energy to her vocal delivery, and there is a brief but excellent lead part on guitar. This version is without the coda of the original Beatles recording. She also delivers a gorgeous rendition of Sting’s “Fragile,” a song from …Nothing Like The Sun. Sting himself had also released the song in both Spanish and Portuguese on …Nada Como El Sol. Carol sings it in English.

The other two Jobim songs that Carol Saboya covers on this release are “A Felicidade,” which he wrote with Vinicius de Moraes, and “Olha, Maria,” which he wrote with Chico Buarque and Vinicius de Moraes. “A Felicidade” is from the 1959 film Black Orpheus, and this version by Carol Saboya is excellent, mostly because of her vocals. Interestingly, it ends with drums. “Olha, Maria” features some beautiful work on saxophone. Claudio Spiewak joins the group on acoustic guitar for “Faltando Um Pedaco,” a song by Djavan Caetano Viana. The CD then concludes with one of my favorite tracks, “Zanzibar,” written by Edu Lobo. I love the energy and that rhythm. I just want it to carry me away to a land without deceit, without racism, without fascism… a land without Trump. By the way, this song features a great lead on guitar by Leo Amuedo.