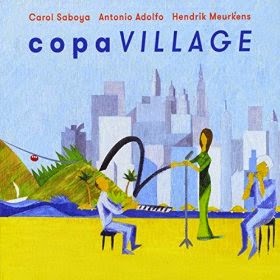 Copa Village, the new CD from Carol Saboya, Antonio Adolfo and Hendrik Meurkens, explores the music of bossa nova, covering some tunes from Antonio Carlos Jobim, one of the musical genre’s greatest composers, while also adding their own compositions to the mix. Carol Saboya provides the vocals, with Antonio Adolfo (Carol’s father) on piano and Hendrik Meurkens on harmonica and vibraphone. Joining them are Adriano Santos on drums, Itaiguara Brandão on bass, Claudio Spiewak on guitar and André Siqueira on percussion.

They kick off the album with one of the most famous bossa nova compositions, “The Girl From Ipanema,” written by Antonio Carlos Jobim, with lyrics by Vinicius De Moraes and Norman Gimbel. I love the addition of harmonica, which is featured briefly before Carol’s vocals come in, and then throughout the song. This is a sweet, easy-going rendition, with Carol’s vocals coming in like a beautiful summer breeze. She first delivers the English lyrics, and then the Portuguese.

That’s followed by “Copa Village,” the CD’s title track, an original tune composed by Antonio Adolfo and Hendrik Meurkens. The song is named for that famous sector of Rio de Janeiro where bossa nova first took hold, combined with a section of New York that is also known for music. This is a playful and smooth track, with a catchy hook and some nice work on guitar. “Show De Bola” is a wonderful tune composed by Hendrik Meurkens, with Portuguese lyrics by Paulo Sergio Valle. I really like the percussion and the vibraphone on this track.

“Como Se Fosse” features some more wonderful and sweet work on harmonica, particularly in the instrumental section, and also some really nice work on piano. This track was composed by Hendrik Meurkens, with lyrics by Ana Terra. Carol Saboya’s vocals have a pretty and friendly vibe. Hendrik Meurkens and Ana Terra also wrote “Nosso Mundo.”

“Pretty World,” a happy-sounding song written by Antonio Adolfo, Tiberio Gaspar, Alan Bergman and Marilyn Bergman, is delivered in English. Here is a taste of the lyrics: “Take me in your arms, and our little world will be the place of places/Nothing else to make but breakfast and love/We’ll hang a little sign that just says ‘Paradise, Population two’/I know together we can make a pretty world, for me and for you.”

Antonio Carolos Jobim’s “Two Kites” is likewise in English. Carol Saboya, Antonio Adolfo and Hendrik Meurkens also cover Antonio Carlos Jobim’s “O Boto,” “Agua De Beber,” and “Pois É.”  “Agua De Beber” is a tune from Jobim’s first album, released in 1963. Carol Saboya, Antonio Adolfo and Hendrik Meurkens do a totally delicious and lively rendition of this composition. This is one of my personal favorite tracks from this release, partly because of the percussion and partly because of Carol Saboya’s absolutely beautiful vocals. And her delivery of “Pois É” is just this side of enchanting, while Hendrik Meurkens’ work on harmonica is excellent, making that another highlight of this CD.

Copa Village concludes with “Visão,” probably the album's most beautiful track. It was composed by Antonio Adolfo and Tiberio Gaspar, and features some gorgeous vocal work by Carol Saboya. I love the mellow vibe of this track, and I particularly enjoy Antonio Adolfo's work on piano.

CD Track List
Copa Village is scheduled to be released on February 10, 2015.
Posted by Michael Doherty at 5:18 PM