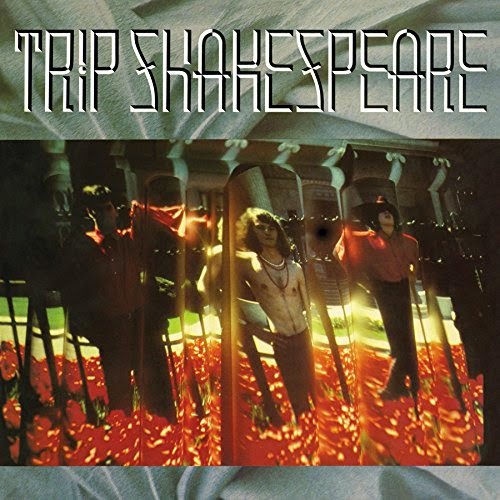 Applehead Man, the first album from Trip Shakespeare, was recently re-issued with several previously unreleased bonus tracks and new liner notes. This album is from when the band was still a trio, before the addition of Dan Wilson on guitar and piano. At this point the band was composed of Matt Wilson on guitar and vocals, John Munson on bass and vocals, and Elaine Harris on drums. (John Munson and Dan Wilson would later go on to found Semisonic.) Tim Rowe joins them on percussion on this release.

I was a teenager when this band released its first couple of albums, but somehow I didn’t get turned onto them until much later. It still strikes me as odd, as I’ve long been a fan of William Shakespeare’s work, and people tend to send things my way that are in any way related to the bard. But these expanded re-issues of their first two albums now give me a chance to immerse myself in Trip Shakespeare.

All tracks on Applehead Man are originals, written or co-written by Matt Wilson. The album kicks off with “Fangs,” an interesting and kind of fun bit of pop-rock. The music is fairly straightforward, but it’s the lyrics that stand out. Here is a taste: “Fangs in the city fifty stories long/Will she push her weapon in a beggar on the ground?/Fire in the city, fools in the woods/When she puts that loser down, isn’t Kelly good?” Certainly not the usual rock fare.

It’s followed by “Rose,” another strange one dealing with winter and decay. Check out these lines: “There are kinds of beauty that a cold wind never shook/You’ll need that beauty once you’ve worn a wedding gown/And your pretty children start to rip your pretty looks.” I really like the prominence of the bass on this album, particularly on this track and on “Stop The Winter.” Just listen to the bass in the instrumental section of “Stop The Winter.” Very cool.

“Applehead Man,” the album’s title track, is one of my favorites on this release. It has a groove that immediately grabs me, and musically has a lot going on. It’s a song you can sink your teeth into. And lyrically it’s certainly on the unusual side: “Carve an applehead man, put him on the fence/You can always hear him tell his apple friends/‘Yes I grew up sweet till I fell from a tree/Things have gotten bad, take one look at me.’” And I love the backing vocals echoing “Take one look at me.” They have both a darker and more humorous tone.

Another of my favorites is “Highway In The Sun,” which begins with some cool, funky work on bass as the song fades in. While it’s the bass that really makes this track a highlight for me, I also enjoy the song’s steady beat. Here is a taste of the lyrics: “Burn my pretty sun, you always know the way is clear/And I always think of ones I meet in other towns/Folks who never bone you in the street or put you down.” This is one I need to put on my next road trip mix CD.

The original album concludes with “Beatle,” a wonderful tune with lots of nods to The Beatles in the music, including a bit of “Lucy In The Sky With Diamonds.” It has a slow, strange groove. “Be now bewitched, bewildered, bothered and wise/I will be a Beatle in your mind.”

This special re-issue contains seven bonus tracks, all of which were previously unissued. These include early versions of “The Nail,” a song that would end up on the band’s 1990 release Across The Universe, and “Patricia,” a song which would be included on the 1991 release Lulu. “The Nail” was written by Matt Wilson and Dan Wilson, and has a delightful quirkiness, its first line being “I came from Minnesota with a nail in my head.” I love this early version. The early version of “Patricia” is quite a bit different from the version that would end up on Lulu. The intro is different, and there is no drum solo. “Fall,” the first bonus track, has kind of a sweet vibe that I really like. “Freedom Bird” has a little nod to The Doors. “Fool Of The Wicked Kind,” the CD's final track, is probably the most interesting of the bonus tracks.

CD Track List
This special re-issue of Applehead Man was released both on CD and on vinyl on December 16, 2014 through Omnivore Recordings. That same date also saw the release of the re-issue of Are You Shakespearienced?
Posted by Michael Doherty at 8:47 PM