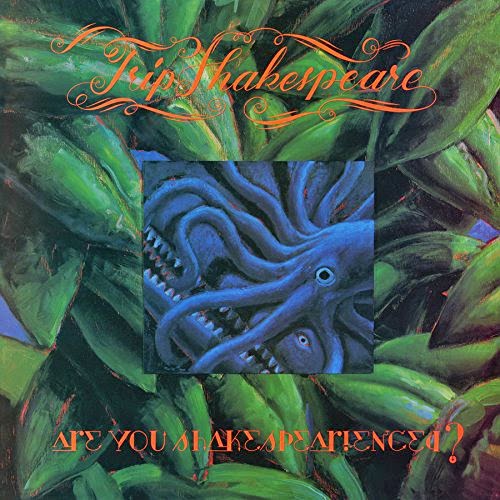 Are You Shakespearienced? was the second release from Trip Shakespeare, and the first to feature band member Dan Wilson. The album’s title, of course, is a play on the 1967 Jimi Hendrix record, Are You Experienced. All of the album’s songs were originals, written or co-written by Matt Wilson. Like the band’s first release, Applehead Man, this album features intriguing, unusual lyrics. But this one is even more interesting with a more accomplished, distinct sound overall, with several excellent songs. The new expanded re-issue contains nine bonus tracks, most of which were previously unreleased, as well as new liner notes.

This CD kicks off with “Diane,” a song written by Matt Wilson and Dan Wilson. It has a bit of a bouncy pop feel, but it is that short bridge halfway through that really wins me over. Here is a bit of the lyrics: “Relax your hand/Trusted angel/Stranger than the things young men should know.” (This band has quite a few songs with women’s names as titles: “Diane,” “Patricia,” “Pearle,” “Mariah,” “Susannah,” “Lulu.”)

“The Lake” opens with a really good groove, and has more of a trippy vibe to it. It has a sort of early Jefferson Airplane feel at moments, which I love, and some excellent vocals, particularly at the end. This is one of my personal favorites. It’s followed by “Swing,” which also has a fantastic groove, and a vocal line that reminds me of something that Entrain would later do. It also has a cool, jazzy jam quality, helping to make it another highlight. Plus, check out these lyrics: “Swing! She swung down from a tree this spring/On a rope of white mercy with a bell to ring/Yeah, she swung down to my world hung down on a string.”

One of the oddest tracks is “Toolmaster Of Brainerd.” It has more of a hard rock sound and attitude (“He played guitar like a natural disaster”), but then with a strange, theatrical vocal section in the middle: “Up in Brainerd, where the children go to milking school/He learned to play the Gibson that his dog had found/And he came to haunt the bars of Minneapolis town/Now the spell-casters, the jeweled and cruel pastors/In town came to enchain the Toolmaster.” The total effect is strange and fun. It’s hard to dislike the tune, but I prefer the following track, “Vines.” It too has a bit of an odd feel, and features Elaine on xylophone. Here is a taste of the lyrics: “Boughs hung heavy with the poison charms/Wrapped my body in their coiling arms/Stained my vision with the purple juice we know.” There is also some cool work on keys.

The original album concludes with “Reception,” a song about being drunk at a wedding reception, as Dan mentions in the liner notes.  “On the steps I fell to darkness/And her friends came out around me/But I saw the darkness only/Drunk now, I will be lonely.”

This special re-issue contains nine bonus tracks, all but one of which were previously unissued. The first, “Earth, By Revolving,” is the one that was previously released, as the flip side to the “Pearle” single in 1990. It’s followed by “Car,” an absolutely delightful song with a cool groove. Here is a taste of the lyrics: “Car, I’ve got to have one/I’m old, I’m old, I’m old not to have one/The woman that I’ll see tonight/She can take me where she will/She makes planes fall out of the sky.” This is one of my favorite tracks on this CD. “Look At The Lady” features some really nice vocal work, and “Stories End” is a good pop tune.

The bonus tracks also include early versions of “Reception,” “Bachelorette” (which would be included on Lulu) and “Snow Days” (which would be included on Across The Universe). This version of “Bachelorette” is a bit shorter, without that extended ending. “Snow Days” is one of my favorite Trip Shakespeare songs, and it's great to hear this early, longer version.

CD Track List
This special re-issue of Are You Shakespearienced? was released on December 16, 2014 through Omnivore Recordings. That same date also saw the release of the re-issue of Applehead Man.
Posted by Michael Doherty at 7:40 PM