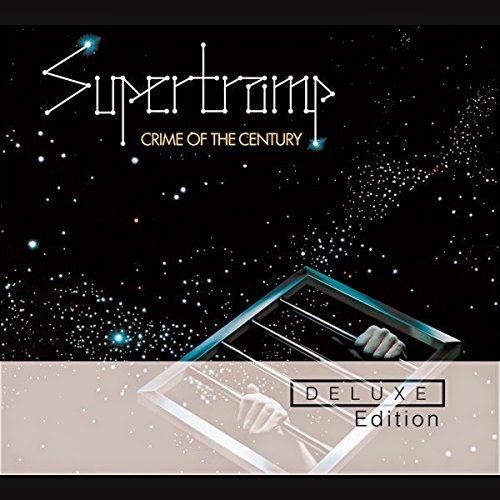 Crime Of The Century was the third album released by Supertramp, and the first to really have any commercial success. It featured basically a new lineup of band members, and included the hits “Bloody Well Right” and “Dreamer.” It was the first Supertramp album I ever bought (on cassette).  For the fortieth anniversary of this excellent album, it was remastered and issued in a Deluxe Edition, which includes two discs, the second being a concert performance from March of 1975. This edition also includes extensive liner notes by Phil Alexander, with snippets from interviews with band members.

Disc One: Crime Of The Century Original Album

I always loved the album’s opening track, “School.” It starts off with a lonely, plaintive harmonica, almost crying out from a distance. The first time I heard it, I was intrigued, and immediately pulled in. And then when the vocals come in, at first the song retains a strange mellow quality, with the sounds of children playing in the background. Then nearly two minutes in, the song kicks in with a steady beat, but still finds lots of interesting places to go.

“School” is followed by “Bloody Well Right,” which was released as the flip side to “Dreamer,” but became the bigger hit in the United States, reaching #35 on the Hot 100. It certainly has more of an edge, due largely to Rick Davies’ vocals. And I love that great keyboard part at the beginning, and the sax at the end. It’s just a great song. “So you think your schooling’s phony/I guess it’s hard not to agree/You say it all depends on money/And who is in your family tree/Right, you’re bloody well right.”

Rick Davies also sings lead on “Asylum,” an engaging song with certain lines that always struck me: “Please don’t arrange to have me sent to no asylum/I’m just as sane as anyone/It’s just a game I play for fun – for fun.” Davies really creates a vivid character in this song, someone with a tortured soul.

“Dreamer” was the album’s big UK hit, reaching #13. It’s a wonderful song, with the brightest sounds of this album. It’s so great to follow the haunted sounds of “Asylum” with the more optimistic, happy sounds of “Dreamer.” And I am always impressed by Roger Hodgson’s vocals on the lines, “Take a dream on a Sunday/Take a life, take a holiday/Take a lie, take a dreamer.”

One of my favorites from this album is Roger Hodgson’s “If Everyone Was Listening,” partly because of its theatre theme, but mostly because of its sad, yet hopeful tone. It’s a beautiful song. Check out these lyrics: “For we dreamed a lot/And we schemed a lot/And we tried to sing of love before the stage fell apart/If everyone was listening you know/There’d be a chance that we could save the show/Who’ll be the last clown/To bring the house down/Oh no, please no, don’t let the curtain fall.”

At the first note from Rick Davies’ harmonica, the audience erupts. And then what’s even more telling is that they become almost completely silent for the rest of the harmonica solo at the beginning of “School.” It feels like it’s part respect, part rapture. The band has grabbed the audience immediately. And it’s followed by a particularly excellent version of “Bloody Well Right.” This extended rendition features some great work on saxophone, and some funny “woo-hoo” vocals toward the end, making it a highlight for me.

“Hide In Your Shell” is also quite good, and there is a bit of stage banter before they begin that song. There is also a bit of banter before “Sister Moonshine”: “These are some new songs which will hopefully be on our next album if we ever get time to record one.” And indeed, the next several songs ended up on Crisis? What Crisis? (which was released in the fall of 1975). Those songs include “Sister Moonshine,” “Just A Normal Day,” “Another Man’s Woman” and “Lady.” Of those tunes, “Another Man’s Woman” and “Lady” are my favorites. Both are a lot of fun. “Another Man’s Woman” has a good groove and some nice work on keys. It’s followed by some stage banter, including a bit of interaction with an audience member: “To get on here, you need some material. And the only material you’ve got is that shitty suit you’re wearing.”

Following “Lady,” the band teases the beginning of “Dreamer,” but then stops, and John Helliwell does a funny little rendition of “A – You’re Adorable,” the only cover on this release. It was written by Sid Lippman, Buddy Kaye and Fred Wise. They then do go into “Dreamer,” much to the pleasure of the audience. And then they finish up with the rest of the second side of Crime Of The Century. Band introductions are done before the final song.

Disc One:
Disc Two:
Crime Of The Century: Deluxe Edition was released on December 9, 2014.
Posted by Michael Doherty at 3:44 PM