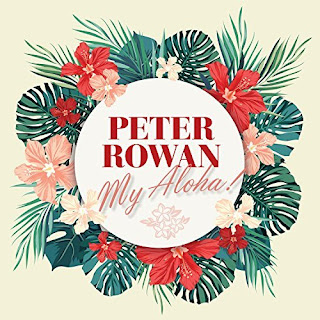 I was turned on to the music of Peter Rowan in my teens because of his work with Jerry Garcia in Old & In The Way. I listened to my cassette of that self-titled album over and over, and two of my favorite tracks – “Midnight Moonlight” and “Panama Red” – were written by Peter Rowan. That (and the fact that my girlfriend’s parents were in a bluegrass band) got me more interested in his solo work. Peter Rowan has released a fantastic body of work, and continues to put out good albums. His new CD, My Aloha!, features music with a Hawaiian flavor. These songs might sound like traditional Hawaiian music, but they are actually original tunes, written by Peter Rowan (though played on authentic Hawaiian instruments). The CD (which follows his 2014 release Dharma Blues) was recorded and mixed in Hawaii. Peter Rowan plays guitar and baritone ukelele. He is joined by Douglas Po’oloa Tolentino on harmony vocals and ukulele, Jeff Au Hoy on slide guitar and upright bass, Kilin Reece on guitar and mandolin, and Uncle Mike Souza on electric bass. The CD contains liner notes by Peter Rowan and Kilin Reece. The music on this album is mostly relaxing, gentle, and beautiful tunes, with some country twang to the vocal delivery at times, showing how the different types of music are related. Relax and let this music take you where it will, like drifting gently on a small boat, with the sun giving you one last caress as it disappears over the horizon, whispering, “Good night.”

Peter Rowan opens the new album with “My Blue Hula Girl,” which begins sweetly with just vocals and guitar. Then after a minute or so, it kicks in and is a fun number, particularly in the vocal line, which is playful at times. That’s followed by “Jerry In The Deep Blue Sea,” a sweet, mellow tune written about Jerry Garcia. The title seems to be a play on the Danny And The Deep Blue Sea. And apparently, after Jerry Garcia’s death, there had been an article titled “Jerry And The Deep Blue Sea,” about his passion for scuba diving in Hawaii (a passion shared by Grateful Dead drummer Bill Kreutzmann). “First we’re here, and then we’re gone/And I know it won’t be long.” The first time I listened to this album, those lines caught my attention, and I found them sad. Accurate, of course, but sad. But Peter follows those lines with this line: “‘Til I’m right back in your loving arms again.” And my spirits are lifted again. This song also has a pretty instrumental section. “Everybody’s got a song to sing/Everybody’s got a bell to ring/Ring it, sing it all night long.”

“Sunny At Sunrise” is a pretty folk song with strong Hawaiian touches and elements. Here is a taste of the lyrics: “Oh, it comes as no surprise/When I look into your eyes/Sunny at sunrise/All the clouds have rolled away/Here comes a brand new day/Sunny at sunrise.” The album concludes with a reprise of this song. The album’s title track, “My Aloha (Appalachian Mountain Home),” has a something of a traditional country sound at the start, but with strong Hawaiian elements, and that combination is highlighted in the song’s title. The lyrics mention Sara and Maybelle Carter. This song features some nice harmonies. “And I will always love you/Though I sail the sea alone.”

“The Waltz Of Waikiki” opens with a really good instrumental section. I love the use of mandolin in this song. “Nights are made for this/A soft and tender kiss/Oh, dreaming you and me/The waltz of Waikiki.” There is another nice instrumental section halfway through the track. Lorin and Chris Rowan join Peter on vocals for “Uncle Jimmy,” which is probably the album’s most fun and delightful track. “Uncle Jimmy, Uncle Jimmy, Uncle Jimmy in the navy/He charmed the hula girls with ukulele.”

CD Track List
My Aloha! is scheduled to be released on May 5, 2017 through Omnivore Recordings. (As a side note, I sincerely hope that Omnivore Recordings – or someone – will re-issue the Earth Opera albums on CD, especially the first one, which begins with the song “The Red Sox Are Winning.”)
Posted by Michael Doherty at 5:00 PM