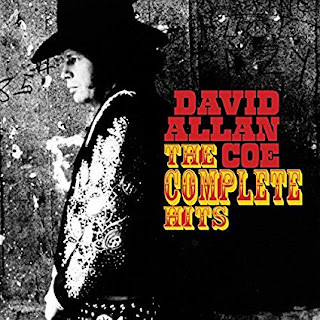 I’ve been listening to a lot of David Allan Coe lately, especially those controversial – and totally hilarious – recordings he released independently, songs from records like Nothing Sacred and Underground Album. I would love for someone – perhaps Real Gone Music – to put out official CD versions of those albums. Seems unlikely, but who knows? In the meantime, Real Gone Music has released a two-disc set of some great David Allan Coe material. Titled The Complete Hits, this set contains thirty-one tracks from the years 1974 to 1987, all singles, all songs that reached the top 100 on the country chart. And though, obviously, none of those delightfully naughty tunes from Nothing Sacred are included, much of the material here demonstrates his sense of humor. Check out songs like “You Never Even Called Me By My Name” (which he didn’t write) or “Longhaired Redneck” (which he did). But it’s not just his sense of humor. This guy can write some damn good songs, deftly playing with words. I like these lines from “Lately I’ve Been Thinking Too Much Lately”: “Once you told me there was no one better/Now you say you’re better off alone.” David Allan Coe is one of my favorite country singer/songwriters, and the songs on these discs should give you a great sense of his appeal. If you have never heard him (and how is that possible, by the way?), this set would be a great place to start. If you have heard him, then this set provides a great opportunity to revisit some of his best material. It includes liner notes by Chris Morris.

The collection kicks off with “(If I Could Climb) The Walls Of The Bottle,” which was released as a single in 1974. It wasn’t David Allan Coe’s first single, but was the first to make it onto the charts, reaching #80 on the country chart. He didn’t write this one. It was composed by Don Goodman and Troy Seals. “If I could climb the walls of this bottle/Oh darling, I’d come home to you.” Oh yes, one of those country drinking tunes, in which he pronounces “wash” as if it were spelled “warsh.” That’s followed by one that he did write, “Would You Be My Lady,” released in 1975 and reaching #91 on the chart. It was also included on the LP Once Upon A Rhyme. This is a good song, with some excellent lines like “Would you walk with me across the bridges I forgot to burn/Could you face the future looking at my past” and “Does it matter to you that you’re not my first love.”

“You Never Even Called Me By My Name” is a fun country tune, written by Steve Goodman and John Prine. Yeah, two talented guys wrote this one, and David Allan Coe’s delivery is perfect. This song mentions some other country artists, such as Waylon Jennings, Charlie Pride and Merle Haggard. “And I’ll hang around as long as you will let me/And I never minded standing in the rain/But you don’t have to call me darling, darling/You never even called me by my name.” But the best part is the spoken word section, and what follows it. In the spoken word part, he says that Steve Goodman wrote the song, telling him it was the perfect country and western song, and that he wrote Steve back and told him it wasn’t the perfect country song because he failed to mention such things as mama, trains, trucks, prison or drinking. And so Steve Goodman wrote another verse, which David Allan Coe sings: “Well, I was drunk the day my mama got out of prison/And I went to pick her up in the rain/But before I could get to the station in my pickup truck/She got run over by a damned old train.” Wonderful! This song was his first big hit, reaching #8. That’s followed by “Longhaired Redneck,” which reached #17. This fun song was written by David Allan Coe and Jimmy Rabbit, and its lyrics mention other country artists like Johnny Cash and Hank Williams. But the lyrics also playfully refer to both Jimmy Rabbit and himself, “They tell me I look like Merle Haggard/And sound a lot like David Allan Coe” and “She said Jimmy Rabbit turned her on to my last album.”

Yeah, a lot of his songs refer to other musicians, and several of his songs refer to himself. “Willie, Waylon And Me” does both, mentioning The Flying Burrito Brothers, The Byrds, The Eagles, The Beatles, The Rolling Stones, Janis Joplin and Bob Dylan, in addition to Willie Nelson and Waylon Jennings. This tune features some cool work on harmonica and is a whole lot of fun. It reached #25 on the country chart, and was also included on Rides Again.

“Divers Do It Deeper” is a country song with a familiar island vibe, and Jimmy Buffet took exception to its similarities to “Changes In Latitudes, Changes In Attitudes.” Well, David Allan Coe then wrote “Jimmy Buffett,” including that song on Nothing Sacred (come on, Real Gone Music, put that one out in a nice CD package). In that song, David Allan Coe sings, “Son of a son of a son of a bitch/What’s all that bullshit for/Jimmy Buffett, he don’t live in Key West anymore” and “So don’t tell me I sound like Jimmy Buffett/Just because I’ve got that island beat.” And he specifically mentions “Divers Do It Deeper.” Anyway, here is a taste of the lyrics from “Divers Do It Deeper”: “While diving the reefs/Lord, she changed my beliefs/As we made love on the ocean’s floor/And she whispered, divers do it deeper/Jockeys do it shorter.” It reached #86 on the country chart. How serious is he with his cover of Tammy Wynette’s “Stand By Your Man”? I’m not sure, but it’s a good rendition, with an added spoken word section: “Well, honey, that’s the only way that Daddy knows how to answer your question/I knew when your mama passed away that someday I’d have to explain things to you that might make me and you both feel uncomfortable/So I thought that the best thing to do was to sing you this song that your mama used to sing, and hope that you would understand/’Cause she did stand by her man.”

The second disc opens with “Tennessee Whiskey,” a song written by Dean Dillon and Linda Hargrove. David Allan Coe’s rendition reached only #77 on the chart in 1981, but a couple of years later George Jones released a version that reached #2. Both versions are good, but I prefer this one by David Allan Coe. Ah yes, love is the drug I’m thinking of. “You’re as smooth as Tennessee whiskey/You’re as sweet as strawberry wine/You’re as warm as a glass of brandy/And I stay stoned on your love all the time.” The first eight tracks on the second disc were written by people other than Coe. “Take Time To Know Her” features some good backing vocals. It reached #58, but the next track on this release, “The Ride,” reached #4. It was written by John B. Detterline and Gary Gentry, and tells the tale of an encounter with the ghost of Hank Williams. Later, Hank Williams, Jr. covered it. That song is followed by “Cheap Thrills,” a cool tune written by Bob McDill. “Don’t you know I like cheap thrills/Night after night, cheap thrills/Well, if you ain’t supposed to do it, I will.”

“Ride ‘Em Cowboy” is a song written by Paul Davis, who released his version in 1974. I think the first version I ever heard was the one by Juice Newton, on her 1981 record, Juice. David Allan Coe released his version in 1983. Interestingly, his version is closer to Juice Newton’s than to Paul Davis’ rendition. That’s followed by “Mona Lisa Lost Her Smile,” David Allan Coe’s biggest hit, reaching #2 on the country chart. It was written by Johnny C. Cunningham, and was included on Coe’s Just Divorced LP. It’s kind of a mellow and sweet tune, and includes some spoken word delivery. I’m surprised this song is his biggest hit, as it is quite different from a lot of his popular material. It’s not a bad song, but it is far from the best on this two-disc set. I prefer the following tune, “It’s Great To Be Single Again,” which was written by David Allan Coe. This one is different too, with a New Orleans vibe, and is a lot of fun. Here is a taste of the lyrics: “There’s no way to say how much your leaving turned me on/I get so excited when I realize you’re gone/You’re just like another verse in some old country song/I got tired of singing long ago.” Yet this one reached only #44. Weird, as it is clearly the better song.

On “Don’t Cry Darlin’” George Jones joins David Allan Coe. And then Willie Nelson joins him on “I’ve Already Cheated On You,” a song that David Allan Coe and Willie Nelson wrote together. It reached #56 on the chart, and was also included on Coe’s Son Of The South. It’s one of my favorites. Here is a taste of the lyrics: “And before I could say I would try to be true/I’d already cheated on you.” That is followed by a rowdier tune, “Need A Little Time Off For Bad Behavior,” written by David Allan Coe, Bobby Keel and Larry Latimer. “I need a little time off for bad behavior/It looks like I’ve been too good for too long.” This collection then concludes with “Tanya Montana,” a sweet song written by David Allan Coe and Billy Sherrill for David’s daughter.

Disc One
Disc Two
The Complete Hits was released on April 7, 2017 through Real Gone Music.
Posted by Michael Doherty at 11:59 PM