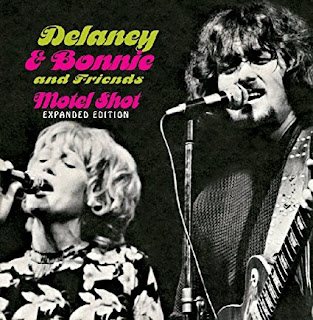 There are a lot of stories surrounding Motel Shot, how and where it was recorded, and just who played on the record (Leon Russell? Joe Cocker? Duane Allman? Gram Parsons? Buddy Miles? Nicky Hopkins? John Hartford?). Pat Thomas attempts to clear up some of the confusion in the liner notes to the new expanded edition of the album, including thoughts from some of those involved in its creation – Bonnie Bramlett, Jac Holzman, Bobby Whitlock and Bruce Botnick. The album has a loose feel, trying to recreate the atmosphere of those motel jams that would happen on tour. Apparently, it was recorded twice, once in a living room, once in a studio (though there is even some question about that). This expanded edition includes several bonus tracks, recorded during the original living room session. The music is a mix of gospel, blues and folk, and features original material as well as covers. In fact, the duo’s biggest hit – “Never Ending Song Of Love” – is from this album.

The album opens with some gospel and traditional tunes, beginning with “Where The Soul Never Dies.” There is a bit of banter at the beginning, as they talk through what they’re going to do, establishing that loose, improvisational feel. There is some fun work on piano (and yeah, it sure does sound like Leon Russell). That leads to a rousing rendition of “Will The Circle Be Unbroken,” and then “Rock Of Ages.” They also do “Talkin’ About Jesus,” which goes on a bit too long (but that certainly sounds like Joe Cocker on backing vocals).

The first of the original songs on the album is “Long Road Ahead,” written by Delaney, Bonnie and Carl Radie, and it’s one of my favorites. “I’m only passing through this town/Because there’s a long road ahead/And a lot to leave behind.” I’ll be adding this song to my road trip play list. The bonus tracks include an alternate take of “Long Road Ahead,” which has a different sound, but is also really good. I might actually prefer this alternate version. There is a bit of banter at the very end. “Never Ending Song Of Love” was written by Delaney Bramlett, and yes, this was their biggest hit. It’s a cheerful, fun, catchy tune, one of those songs that it is impossible to dislike. Though I am still surprised it was a bigger hit than “Only You Know And I Know.” Here is a taste of the lyrics: “I’ve got a never ending love for you/From now on that’s all I want to do/From the first time we met I knew/I’d have a never ending love for you.”

They do an interesting slow, soulful rendition of the Bob Wills And His Texas Playboys country tune “Faded Love.” And I like their version of Robert Johnson’s “Come On In My Kitchen.” There is another version included in the bonus tracks, which is even better. Another highlight of this disc is their rendition of Chuck Willis’ “Don’t Deceive Me (Please Don’t Go),” which features an excellent vocal performance by Bonnie Bramlett. “You know I love you/You know that it’s true/That’s why you treat me, baby, the way you do/Please don’t leave me/Don’t deceive me/Please don’t go.” So good. They also do a nice rendition of “Goin’ Down The Road Feelin’ Bad,” giving it a gospel feel.

The original album concludes with “Lonesome And A Long Way From Home,” a song written by Delaney, Bonnie and Leon Russell (but often incorrectly attributed to Eric Clapton, who toured with Delaney And Bonnie). I saw the Jerry Garcia Band perform this song back in 1989. It’s a damn good song, and this version features fiddle. The bonus tracks include an alternate take of this song, with a good jam.

This expanded edition contains eight bonus tracks, all of which were previously unreleased. In addition to the ones I’ve already mentioned, these tracks include “I’ve Told You For The Last Time,” which Eric Clapton included on his self-titled 1970 record (the same record that featured Clapton’s version of “Lonesome And A Long Way To Home”). Though this CD’s liner notes attribute this one to Clapton, it seems it was actually written by Delaney Bramlett and Steve Cropper. Also included is “Gift Of Love,” a song that was written by Delaney Bramlett and Mac Davis, and included on Accept No Substitute. The version here has a bit more of a blues edge. And then there is the simply titled “Blues,” a blues song written by Delaney Bramlett.

The bonus tracks also include covers of the gospel numbers “What A Friend We Have In Jesus” and “Farther Along.”