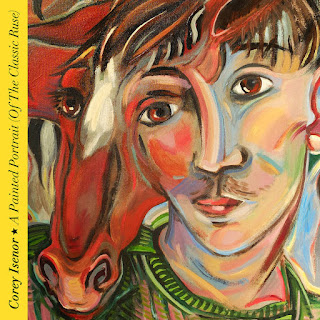 Corey Isenor is a singer, guitarist and songwriter based in Nova Scotia. His new album, A Painted Portrait (Of The Classic Ruse), features all original material. This is the first CD of his I’ve heard, and I was struck by both his songwriting and his honest and friendly delivery. These songs contain some excellent lyrics, with certain lines standing out, like the main line of “Forces Of Our Nature” and these lines from “Forms Of My Desire”: “Oh, the beauty of vision, it can also be a curse/And with every woman that I see, the pain gets worse.” The music has a familiar and sweet vibe, and it’s hard to believe I haven’t heard this artist before. His voice and style are such that we can immediately connect with his music. On this disc he is joined by Liam Frier on electric guitar, Chris Meaney on bass, Benn Ross on drums, Jordi Comstock on percussion, Donald MacLennan on violin, and Andrew Sneddon on pedal steel, as well as a few other guest musicians on certain tracks. Rebecca Zolkower and Desiree Gordon provide backing vocals.

An album that opens with the line “I’ve been dreaming for a long time” is an album that I know is going to speak to me. “Forces Of Our Nature,” the lead-off track, is a pretty song, and I love the violin. As I mentioned, I really like the main line, “We are forces of our nature.” This song features folk and country elements. Corey Isenor follows that with “Losing My Mind,” a song which shows the compassion in his voice. Every time I listen to this disc, the line “I’ve got horses in the stable, but they’re all unhappy” amuses me. In this song he wonders, “Am I losing my mind?” Ah, who can tell these days? Recent events here in the U.S. have me questioning reality on a daily basis.

“The Navy Blues” has a nice, relaxed country vibe, and also has a delightful, playful sense, which I appreciate. You can hear it in lines like “Been hanging around with those darker hues” and “Dressed in denim to only confuse.” This is also the song that provides the album with its title. I liked this song the first time around, and like it more each time I listen to this disc. It’s followed by one of my personal favorites, “Ferry Tale.” I love Corey’s vocals, that catchy guitar part, and the whole vibe of this tune. It makes me smile every time. Here is a taste of the lyrics: “Breaking the speed limit/All of your heart in it/Nothing will keep you from trying/Hell of a day/But this car’s in my way/And I can’t get by/Time slips away/As the sky turns to grey.” And I love the piano part by Steve Chapin, who joins Corey on this track.

“Diamonds On The Moon” begins as a pretty, thoughtful guitar instrumental piece, and adds some animal sound effects, which I could take or leave. Then the band comes in and the tune takes on a brighter, happier tone. Rosalind McPhail adds some great touches on flute, which in a way relate to the earlier bird sounds. “And it’s been said/There is more to you than meets the eye/Of this oncoming storm/And I’ve been forewarned/There is still much to learn/From this skin yet unburned/Hidden away/Always a look, but never a line to be heard.” Rosalind McPhail also plays flute on “Burning The Hickory,” an instrumental track.

Another highlight of this disc is “From Towers To Windmills.” That moment when the song really kicks in is tremendous, like a gorgeous burst of positive energy and emotion. I can’t help but be moved by this song. You should definitely check it out. Music like this can do us all some good. Mike O’Neill plays bass on this track. The album then concludes with another instrumental track, “The Dark Horse.”

CD Track List
A Painted Portrait (Of The Classic Ruse) was released on September 16, 2016.
Posted by Michael Doherty at 12:05 PM