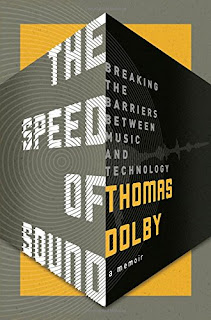 It is likely that a good number of people still know Thomas Dolby primarily for his hits “She Blinded Me With Science” and “Hyperactive!” But a few years ago he released A Map Of The Floating City, which featured some of the best music he’d ever recorded, and was one of my favorite CDs of 2011. And, it turns out, he’s been involved in a great deal of other work over the years, much of which is detailed in his new book, The Speed Of Sound: Breaking The Barriers Between Music And Technology.

The book is divided into two main parts, the first dealing with his early career in music, the second with his foray into the business of technology, including cellphone ringtones. I was initially more interested in reading about the first subject, but found, to my surprise, that the second was equally intriguing. He basically tells his tale chronologically, and there are plenty of anecdotes to engage any music fan, including moments where he himself is the fan, such as working his way into an Elvis Costello gig. And of course he tells that now-famous anecdote of finding a synthesizer in the dumpster, which really led to his start in music. He talks about his early bands, like Bruce Woolley And The Camera Club, a band that actually recorded the first version of “Video Killed The Radio Star.” (The Buggles’ version became the hit.) One of the craziest stories was about being ripped off after recording what was to be his first solo single and ending up as a street musician asking for change in Paris for a while.

Thomas Dolby takes us behind the scenes of the music industry, letting us learn, just as he learned, what might cause a single to stall at a certain point or drop off the charts entirely. And because he’s a tech guy, he’s specific about the various pieces of equipment he used at different stages of his musical development, which I find fascinating. Also fascinating is the material on the specifics of how an appearance on Top Of The Pops is conducted. And for those who are mostly interested in “She Blinded Me With Science,” you won’t be disappointed. He offers some interesting tidbits about that song, like how he had the story idea for the music video before he’d written the actual song.

He’s worked with some interesting folks over the years, including David Bowie and Jerry Garcia. I had no idea that Thomas Dolby was a Grateful Dead fan. It still seems strange to me, but Jerry Garcia and Bob Weir actually worked on one of his songs. As a Dead fan myself, I am particularly intrigued by this portion of the book. I don’t have that album, but now am determined to get myself a copy of Astronauts & Heretics.

The second part of the book deals with his work with technology and business, including video game scoring, which requires a non-linear approach to music. And don’t worry, you don’t have to be a tech person to enjoy this section. I’m not a tech person at all. In fact, technology and I rarely get along. Sure, there were a few terms that I wasn’t familiar with, but this section is a fairly easy and interesting read. He also goes into the stresses of running a business, and all of this is really a long, winding journey back to music.

He does give a bit of information about A Map Of The Floating City at the end, but I wish he’d included a lot more about this excellent album. That part felt a bit rushed and incomplete. One other small thing that I found irritating is his use of “effing” in the line “It could only play one note at a time and had a single oscillator and filter, but cranked up through a beaten-up Ampeg SVG bass amp it sounded effing great” (p. 25). Just please write “fucking” if you mean “fucking.” Or, if you don’t want to say “fucking,” then just pick another word entirely.

The Speed Of Sound: Breaking The Barriers Between Music And Technology was released on October 11, 2016 through Flatiron Books.
Posted by Michael Doherty at 6:20 PM