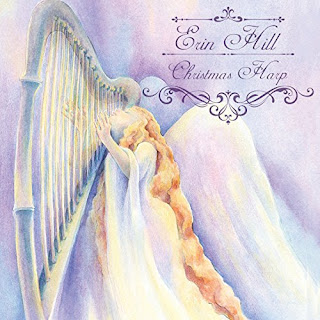 Earlier this year, harpist and singer Erin Hill released an album of beautiful covers, including a particularly passionate and moving rendition of Leonard Cohen’s “Hallelujah” and an excellent delivery of “Habanera.”  I was struck by her voice as much as I was won over by that gorgeous harp. And now she has released a holiday album titled Christmas Harp, which features both instrumental tracks as well as vocal recordings. There is something magical about a harp. It’s an instrument that almost automatically transports us out of our current reality, our current time, and puts us in touch with something eternal, or outside of time. And that is something that is quite desirable now.

She begins the album with “What Child Is This?” This is a beautiful song, though I prefer the original “Greensleeves.” She follows that with “Christmas Canon,” one that’s not all that familiar to me, a song by Trans-Siberian Orchestra from their The Christmas Attic album. I prefer the instrumental sections, which have a pretty innocence, and are basically “Pachelbel's Canon.” So, interestingly, she begins the album with two Christmas songs that are based on earlier pieces. For “Christmas Canon,” Erin Hill has recorded several vocal parts, accompanying herself, and the results are beautiful.

“My Favorite Things” is not really a Christmas tune, but I suppose it’s related to the holiday in as much as it lists things she likes, which could be read as a Christmas wish list. Plus, the list includes “sleigh bells,” “snowflakes that stay on my nose and eyelashes” and “silver-white winters,” which are all part of the holiday. I’m not a fan of this song, and I’ve never been able to make it through The Sound Of Music, but I do like the instrumental sections of this rendition. She follows that with an absolutely beautiful instrumental version of “Carol Of The Bells,” one of my favorite tracks of this CD. And then she delivers a stunningly gorgeous version of “Ave Maria.” This is an incredible performance, and in my opinion is the best track of the disc. If this doesn’t move you, something has gone horribly wrong.

I’ve always loved Bach’s “Jesu, Joy Of Man’s Desiring,” and Erin Hill does a wonderful job with it here. She also delivers a very pretty rendition of “Silent Night.” Here too she harmonizes with herself, and the results help make this track another of this CD’s highlights.

Debussy’s “The Girl With The Flaxen Hair” isn’t a Christmas song, but it’s a pretty piece, especially as Erin Hill presents it. She then concludes Christmas Harp with “Pie Jesu,” which translates roughly as “Jesus’ Foot” (just kidding, of course). On this composition, Erin delivers another impressive and moving vocal performance.

CD Track List
Christmas Harp was released on October 28, 2016 through Goldenlane Records, a division of Cleopatra Records.
Posted by Michael Doherty at 6:07 PM