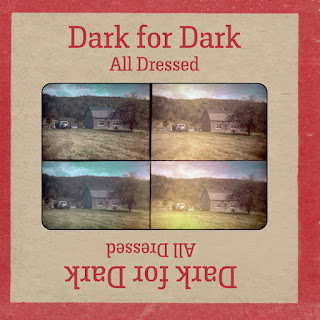 Dark For Dark is the trio of Jess Lewis, Melanie Stone and Rebecca Zolkower, based in Halifax, Nova Scotia. They put out their debut full-length CD, Warboats, in 2013, and have now followed it up with All Dressed, an EP of original material written by Rebecca Zolkower. By the way, you might know Rebecca Zolkower from her many appearances on other artists’ releases. She sings on CDs by Old Cabin, Ronok Sarkar and Corey Isenor, among others. She is also a member of Dance Movie. And you might be familiar with Jess Lewis through her Cactus Flower project. And you might know Melanie Stone through her work with The Heavy Blinkers. So, yeah, these are three talented and experienced singers and musicians. On their new CD they are joined by Asa Brosius on pedal steel and Matt Gallant on drums. This is an excellent disc.

The EP opens with “Orchard,” a song that is a total delight, with a joyful and innocent sound. It’s heavily influenced by 1960s folk rock, heard in the approach on guitar and the blending of vocals. There is also a touch of The Nields at one key moment here. “Over and underneath the sky/I forced my body back inside/But it’s not true/What they are telling you.” That’s followed by “Moon Full Moon,” which has a slightly darker feel about it, reminding me a bit of Velvet Underground at the beginning. But there is something oddly pretty about this tune.

“Blue Morning” has sort of a Cowboy Junkies vibe (Cowboy Junkies are also a Canadian band), with a haunting country sound. This track features some gorgeous vocals. “Maybe there’s a plan/For picking up on chances/Maybe at the end of the day/You’ll get it anyway/Because it’s a blue morning/You want to be yourself.”   Then “Owls” has a 1960s thing happening in the guitar, as well as in the drumbeat.

“Unseasonal” is a mellow and beautiful piece. “We were unfamiliar, I was scared/But now you’re everywhere/Like a warm breeze/It’s unseasonal, we couldn’t breathe.”  Dark For Dark then concludes the EP with “The Roof.” There is something both uplifting and comforting about this song. “Our eyes will adjust in the dark.”

CD Track List
All Dressed was released on June 24, 2016 on Headless Owl Records.
Posted by Michael Doherty at 2:18 PM