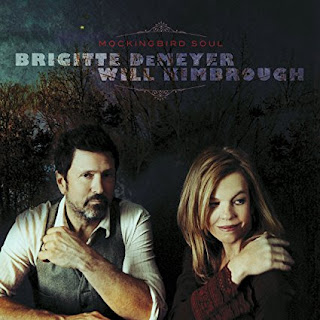 Both Brigitte DeMeyer and Will Kimbrough have been writing, performing and recording for years, and have collaborated on albums like Brigitte DeMeyer’s 2014 release Savannah Road. But until now they haven’t released an album as an official duo. That will change in late January with the release of Mockingbird Soul, a wonderful album featuring mostly original tracks written by DeMeyer and Kimbrough together. Brigitte DeMeyer plays ukulele, and Will Kimbrough is on guitar and harmonica. They are joined by Chris Donohue on upright bass, and by a few guest musicians on certain tracks. The focus, however, is on their songwriting and their vocals, with some delicious harmonies.

They open this album with “Everything,” a song with a sweet, comforting vibe and a great blending of vocals. “Come another summer, yeah, you may be gone/But I’ll be coming for you if you’re gone too long/All you are to me is everything.” Don’t we all want to hear someone say that to us? I really like this track, which features Jano Rix on percussion. Then “Broken Fences” has a bit of a heavier vibe, with some really nice guitar work. Will Kimbrough sings lead on this one. “Make me rich if rich means free.”

Brigitte DeMeyer takes lead vocal duties on “The Juke,” a tune with a good groove and a cool, bluesy back porch feel, with Will Kimbrough providing great touches on harmonica. This track has an excellent energy too that helps to make it one of the disc’s highlights. I just love this track more and more as it goes on. Jano Rix joins them on this track. “Turn down your sorrow and turn up the juke.”

“Mockingbird Soul,” the CD’s title track, is a loose, kind of sparse, but very cool bluesy tune with an impressive vocal performance by Brigitte DeMeyer and some nice work by Chris Donohue on bass. “Rainy Day” too has a sparse instrumentation, letting the vocals really take focus. On this tune, Chris Wood plays upright bass, and the instrument has a special prominence. Great stuff.

Another favorite is “I Can Your Voice,” in which they sing, “I can hear your voice in everything/Everything/I’d give anything to hold you close/Right now.” This song is both sweet and heartbreaking, about an aging parent. Maybe it’s because we’re all feeling a bit fragile these days, but this song had me in tears. “I still need you, but you’re leaving.” And yet it expresses a positive outlook about the future. They follow that with a more playful number, the delightful “Honey Bee,” with Brigitte singing, “Yes, I could be your little honey bee/I’d go on buzzing up around your tree/Sit on your shoulder, but I would not sting/I’d be as gentle as a hurricane/If I could be your little honey bee.”

“Until Then” begins somewhat delicately with just Brigitte’s voice and ukulele. “Until then, I’ll see you in my dreams.” And when Will Kimbrough comes in on guitar and vocals, the song has something of the feel of a lullaby. The album then concludes with its only cover, a rendition of The Incredible String Band’s “October Song,” a song from that band’s self-titled 1966 debut album. Brigitte and Will begin it with a nice instrumental section.

CD Track List
Mockingbird Soul is scheduled to be released on January 27, 2017.
Posted by Michael Doherty at 4:01 PM