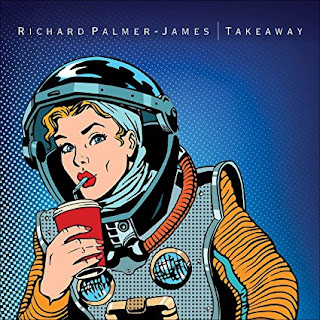 Richard Palmer-James was a founding member of Supertramp and also a songwriter for King Crimson, co-writing songs for three of the band’s 1970s studio releases. In 1998, he released a compilation album with King Crimson’s John Wetton titled Monkey Business 1972-1997. But until this year he had not released a solo album. Why such a long wait? I don’t know, especially as the CD, titled Takeaway, is really quite good and original, with some excellent lyrics. Richard Palmer-James provides the lead vocals, and plays acoustic guitar, electric guitar, slide guitar and mandolin. Joining him on this release are Evert Van Der Wal on drums, guitar, and bass; Alex Klier on bass; Theo Degler on piano and accordion; and Peter Bischof and Friederike Sipp on backing vocals. All of the tracks are originals. Richard Palmer-James is currently based in Munich, where he’s lived since the 1970s, and apparently plays regularly in that area. I hope this debut solo CD will soon be followed by more and perhaps also by some touring of the states.

I wasn’t sure what to expect when I first popped this disc into my player, but the opening track, “Aerodrome,” is a quirky, mellow pop song that won me over fairly quickly. Check out these opening lines: “So this is where you spend your nights/In a crowded dream/Entertained by sound and lights/And a drum machine.” And the chorus is oddly catchy, and is what cemented my appreciation for this song. You’ll know what I mean when you hear it. “This used to be an aerodrome/There used to be planes here/They used to fly.” That’s followed by “A Very Bad Girl,” which is more of a rock tune with a good groove. “The last thing the world needs now is another bad girl.” Well, that depends on which way she’s bad, I suppose. This song has a sense of humor which I appreciate. “Well, I’ve been saving my money/And I’ve been hoarding my pay/No sense waiting for Christmas/I just might throw it away/On a very bad deal, for a very bad girl/Enough is never enough for a very bad girl.” This song ended up being one of my favorites.

Then “Baker’s Dozen” has kind of a pretty vibe. As I already mentioned, these songs feature some really good lyrics. I love this line, which stood out for me the first time I listened to this disc: “And if there was a lesson learned, you sure don’t let it show.” “Dance For Me” has a cool, bluesy sound on guitar, mixed with some pop and country elements to become a catchy, delightful number. “I’m gonna sell my radio/Gonna turn off my TV/I’m gonna hide from the world outside/Before it shoots at me – they’re shooting at me.”

I really like these lines from “Highway Code”: “She says, the help I need ain’t the same as the help I’m owed/But this life I lead took a turn down a dark side-road/If you go down there, better swallow the truth you’re told, babe.” Not bad, eh? “Doing Time” then begins like a folk song sounding about ready to explode, with a great rhythm. “You do time for your money/And time for the air you breathe/For this world is your prison/Ain’t nothin’ you’ll take with you when you leave.”

One of my favorites from this album is “Guano Blues.” It is a bluesy pop gem with a good groove. Something about that groove and Richard Palmer-James’ vocal approach here remind me just a bit of Marc Bolan from T. Rex. And check out these lines: “I got the feeling you’re gone/Although your perfume in the cushion on the sofa lingers on/Like a beautiful song/I wonder, baby, where the hell did I go wrong?/Please let me know if it was something I said/Or was it something you heard?” Also, the song’s title makes me laugh.

From “So We Meet Again,” one line that stands out for me is “My good intentions leave when you walk in.” I also like these lines: “Just another chance encounter in the company of ghosts/And another road to reason we have closed.” Did I mention this CD boasts some excellent lyrics? The album then concludes with its title track, “Takeaway,” the disc’s only song to have been co-written by Richard Palmer-James with Evert Van Der Wal (Palmer-James wrote the lyrics, Van Der Wal wrote the music). “No one could touch you underneath your sorrow/Or judge the life within.” This song has a friendly warmth. “I’ll wrap you tight and warm/And hold the world at bay/And in another life/I’ll take you far away.”