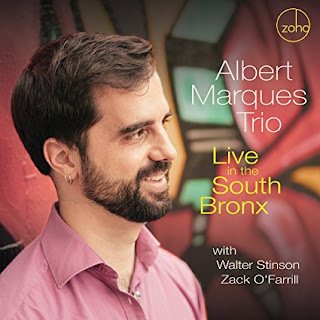 Albert Marques is a jazz pianist based in New York (though from Barcelona), and his new album is a live recording from July 11, 2015 at Pregones Theater in the Bronx. Live In The South Bronx features mostly original material, with just a couple of covers. The trio features Walter Stinson on double bass and Zack O’Farrill on drums.

The opening piece, “Double Sur,” is an intriguing track, at times playful, even sly, and moving easily from one path to another, seeming to threaten to build into an orchestral giant if other musicians suddenly joined them. It is dominated by Albert Marques’ piano, but the bass and drums are often what add a sense of daring to the composition. “Double Sur” was composed by Albert Marques, as was the following track, “IDN,” which begins with a bass solo that is almost delicate at moments, quietly, gently pulling us in. The tune then takes on a strange, somewhat dark tone as the other instruments come in, like a tentative step into a surreal reality with glass trees and deceptive, angular women coming toward us from impossible places, the piano sometimes describing the scene, sometimes conducting it. But then once we’re firmly part of the landscape ourselves, it’s hard not to take that next step. In fact, this world has hold of our feet and face and sometimes pulls them in opposing directions; yet there is no pain, we change and adapt, mostly. The drums present an irregular heartbeat, the bass then moving through the landscape with us, and returning us, at least in part, back to our reality.

The first cover of the album is “Iris,” written by saxophonist Wayne Shorter, and recorded by Miles Davis (it appears on the 1965 record E.S.P.). This track begins in a more mellow way, but has its own peculiar energy, heard at times in that great lead on bass, and then in that sudden fiery burst on piano around the four-minute mark. Each of these tracks feels like a living, breathing, moving entity, a beast with hunger, needs, problems and anger and joy. Check out “Jazz Is Working Class” for a perfect example. This one gets angry, then as if having exhausted itself, relaxes a bit. Then listen to that great section with bass and drums. There are also some vocals; that is, vocal noises, no lyrics, like the beast is finding a new way to communicate and is testing it out. An expression of joy or an attack? Or both?  That leads to a very cool drum solo, a more basic and always effective form of communication, and the crowd responds enthusiastically.

Then “Cançó Pel Pare” has a more intimate feel from the start, but still with a slightly chaotic edge at moments, as if to say we can’t control even our most personal affairs. There is always that element of chance, of the unknown, of something darker around a corner. I love that brighter, happier piano part that emerges nearly halfway through. A comforting sound, even as the drums retain a wildness and the bass a tenseness. It’s like a soft beauty in the darkness, and it comes out triumphant. It’s followed by the album’s other cover, a really good rendition of Bill Withers’ “Ain’t No Sunshine,” which begins as a piano solo, then takes on a kind of funky edge as the bass and drums come in, before settling into that familiar groove.

The CD concludes with one track composed by bassist Walter Stinson and one composed by drummer Zack O’Farrill. The first, “Alan Watts,” was written by Stinson, and has a contemplative vibe and makes effective use of pauses. It then builds into something beautiful. “Foggy Conscience” was written by O’Farrill, and its mood is darker and intense. And right when it’s about to break you or consume you, there is a change, becoming kind of playful, even if there is a twisted side to its playfulness.

CD Track List
Live In The South Bronx was released on November 4, 2016 through Zoho Music.
Posted by Michael Doherty at 2:09 PM