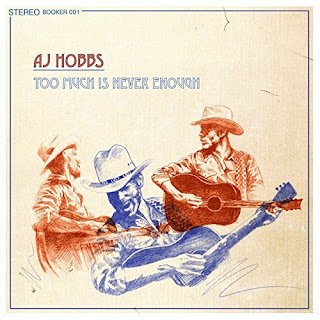 Ted Russell Kamp sure has his hand in a lot of great music these days. I’m not sure just how many bands I’ve seen him play with, or how many CDs he’s appeared on, but I’ve learned to pay attention to any project he’s a part of. He not only plays bass on AJ Hobbs’ new release, Too Much Is Never Enough, but also co-produced the album. Too Much Is Never Enough is AJ Hobbs’ first full-length release, following two EPs (one of which was released under the name Cal King). This album features some honest, shit-kicking country tunes driven by guitar and vocals. In addition to Ted Russell Kamp, Hobbs is backed by Storm Rhode IV on guitar, Jeremy Long on guitar and pedal steel, John Schreffler Jr. on pedal steel, Aubrey Richmond on fiddle, Brian Whelan on keys, Matt Lesser on drums and Jim Doyle on drums. Makeda Francisco, Oya Thomas and Kitten Kuroi provide backing vocals. At least some of those names are likely familiar to you. Makeda Francisco, for example, sang on Mavis Staples’ One True Vine album. Kitten Kuroi sang with Elvis Costello. John Schreffler, Jr. plays pedal steel and electric guitar on the Lasers Lasers Birmingham EP Royal Blue. Aubrey Richmond plays fiddle on CDs by Funkyjenn, Kelly’s Lot and Michael-Ann. Anyway, you get the idea. These are all accomplished musicians and singers, and they all seem to be having a great time with these tracks. Most of the songs here are originals, written or co-written by AJ Hobbs.

Too Much Is Never Enough opens with its title track, a good country rock tune about a musician’s troubles with alcohol, with lyrics that mention Johnny Paycheck and his song “Fifteen Beers.” “And was I singing like Johnny Paycheck, or just drinking his fifteen beers/My memory’s a little rough/I should just lay off the stuff/Because one is too much, and too much is never enough.” AJ Hobbs himself has had his own battles with the bottle, and certainly gets a good part of his inspiration for this song from those troubles. “Life Without You” features some really good lyrics, such as these lines: “When I call you from Nashville/It won’t be ‘cause I miss you/It will be ‘cause I’m feeling alone.” And those are followed by another line I love: “You can call me crazy, but girl, what’s the use?” And yet this song is a love song, of sorts. He even speaks of marriage with the woman in question. “But it ain’t worth a damn living life without you.” There is also a delightful little jam featuring some great work on guitar in the song’s second half.

The album’s first cover is Merle Haggard’s “The Bottle Let Me Down,” a song from his 1966 record Swinging Doors. “Tonight the bottle let me down/And let your memory come around.” Ah, it’s so sad when alcohol doesn’t do its job. But boy, this is a great rendition. The CD’s other cover is actually a song by Ted Russell Kamp, “A Whole Lot Of You And Me,” an excellent tune which was included on his Night Owl album as well as on The Low And Lonesome Sound. This country version works quite well, and of course Kamp is on bass. “A little bit of you is all that I’m looking for.”

I absolutely love the backing vocals on “Shit Just Got Real.” For me, they really make that song, adding a delicious touch of soul to this country rock number. There is also some good stuff on keys and pedal steel. “And we were supposed to see your mama/But I can’t make it now/Don’t your mama hate me anyhow?” By the way, “Shit Just Got Real” is a song that AJ Hobbs had previously included on his Cal King EP, where it was the title track. And on “Take It Slow,” Dominique Pruitt joins AJ Hobbs on vocals. Pruitt, a sexy redhead with a distinct and delightful voice, also co-wrote the song. This one is whole lot of fun. “The quicker we get out of here, the slower we can go.” Oh yes!

Another favorite is the disc’s closing track, “Tomorrow I’ll Be Hurtin’,” a relaxed and thoughtful country song about being a traveling musician. “I’ll play you every song I know, and then I’ll play them all again/I think I’ve seen this place before, but I can’t remember when/It’s all sinking in, I can’t turn back now/Shaking hands and paying the band, and getting by somehow.”

CD Track List
Too Much Is Never Enough is scheduled to be released on February 17, 2017 on Booker Records.
Posted by Michael Doherty at 4:15 PM