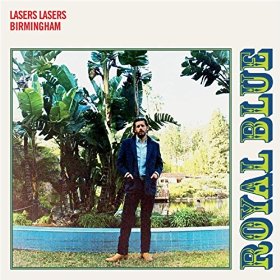 Lasers Lasers Birmingham is the project of Los Angeles-based singer/songwriter Alex Owen (of Vanish Valley). His new EP, Royal Blue, the follow-up to the 2014 self-titled EP, features some very cool country and folk music with something of a 1970s country rock vibe at times. On that first EP he played most of the instruments himself. Joining him on this new CD are John Schreffler Jr. on pedal steel and electric guitar, Seb Bailey on bass, Mikey G on drums, Dave “Mustang” Lang on keys, Jake Gideon on guitar and percussion, and Robert Bonilla on backing vocals.  These tracks are all original tunes, written by Alex Owen. And all four are really strong.

This EP opens with its title track, “Royal Blue,” a wonderful song with a laid-back country feel, featuring some nice work on pedal steel and some sweet touches on piano. Sometimes it still strikes me as strange to hear folk and country songs about Los Angeles, even after living here for many years. “She could paint Laurel Canyon Kelly green and tan/The only thing she would miss of L.A. is the smell of a genuine man.” That’s followed by a more upbeat and fun country rock number, “Hard Man To Please,” with a prominent organ. I like the humorous attitude of this song, with lines like “If you want to fly with me, baby, you’d better sprout some wings/Lay it on thick, ’cause I’m a hard man to please” and “Thank you for the bottle, but we need the whole damn store.”

“Shedd Aquarium” reminds me of some of the great folk and country rock of the early 1970s, particularly in the bass and piano lines, with a delightful full band sound. Here is a taste of the lyrics: “And I can’t stand the sea breeze/Won’t you let me back in/We don’t take to strangers/And I don’t believe we’ve met/Those waters are choppy and rough/You’re not ready yet.” This EP then concludes with “Anyway You Slice It,” a folk song in which at one point he says after a few drinks he’ll sing like The Supremes, a line made me laugh (just the wonderful juxtaposition). He follows that line with: “I’ve got a rousing rendition of ‘You Keep Me Holding On’/I’ve got two lungs full of ‘Baby Love.’” (Funny also because, of course, the song is titled “You Keep Me Hangin’ On.”) I also like these lines: “The end of another bottle of Benzedrine/And every Wednesday I’m on the streets and I’m feeling mean/And any way you slice it, it’s just another routine.” Pretty good, eh?